Headlines in My Dreams 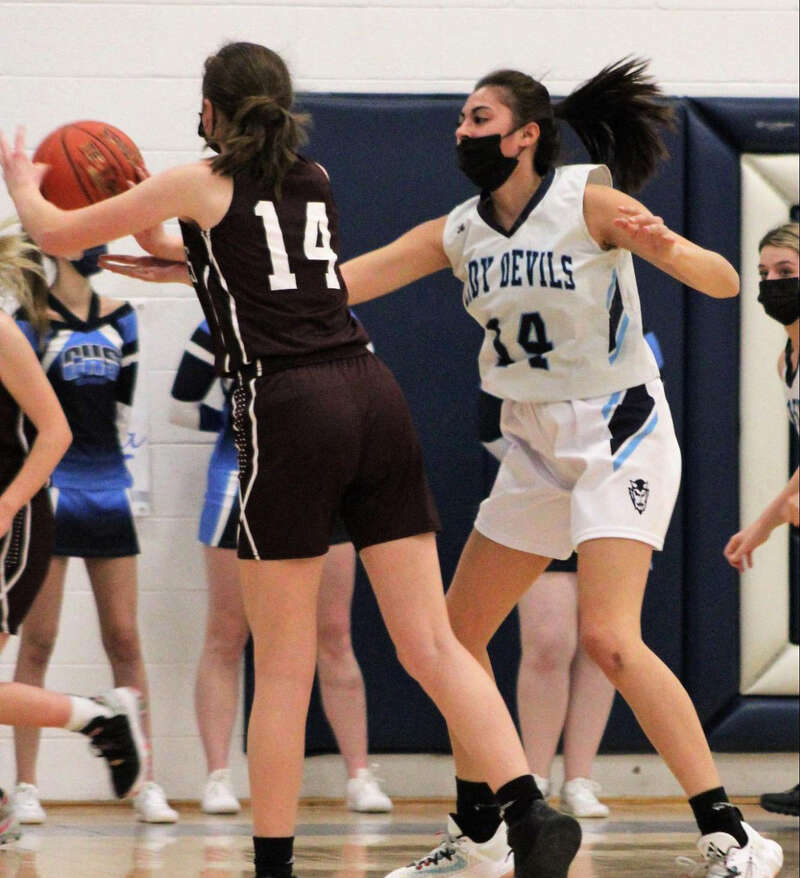 Calais was led in scoring by Sage Phillips, who dropped in 13 points.

Other scorers for Calais were Kendra Stevens with 5, Kayleigh Scott with 4, Kate McPhee with 3, and Francesca Lombardo, Mercedes Owen, and Alexis Donahue each with 2.

Calais traveled to Washington Academy on January 24 and were able to get the victory with a score of 55-46. 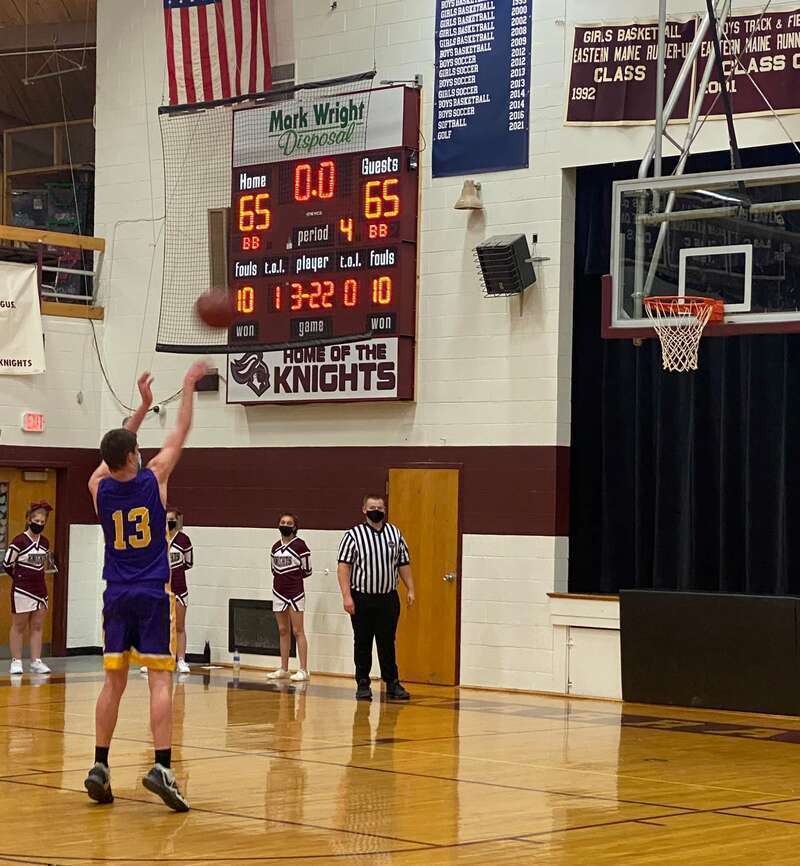 Wyatt MacArthur hit his second of two free throws with no time left on the clock to give the Dragons a one-point win last Thursday night at Narraguagus.

According to Coach Ben Maloney, the Dragons were down six points with just 41 seconds left on the clock. They fought back to tie the game, and as time expired, senior MacArthur drew the foul.  He missed the first, but made the second, giving the Dragons the 66-65 win. 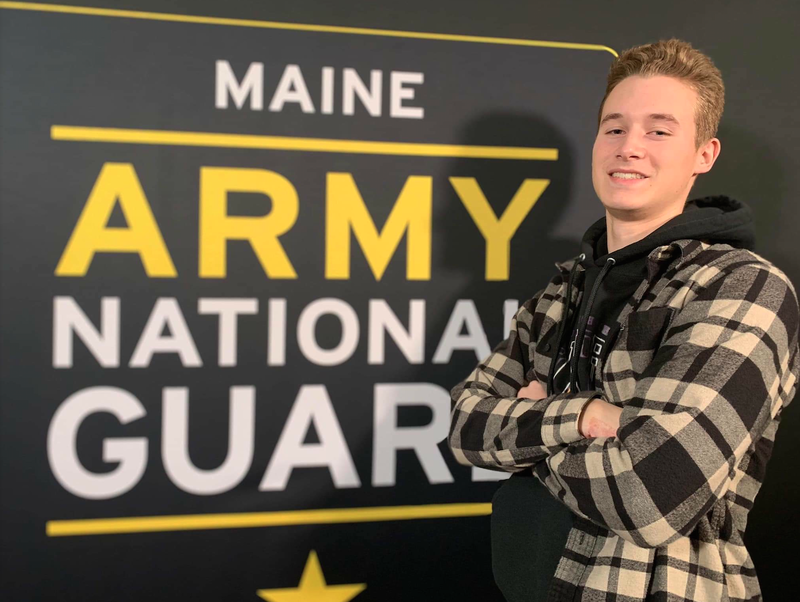 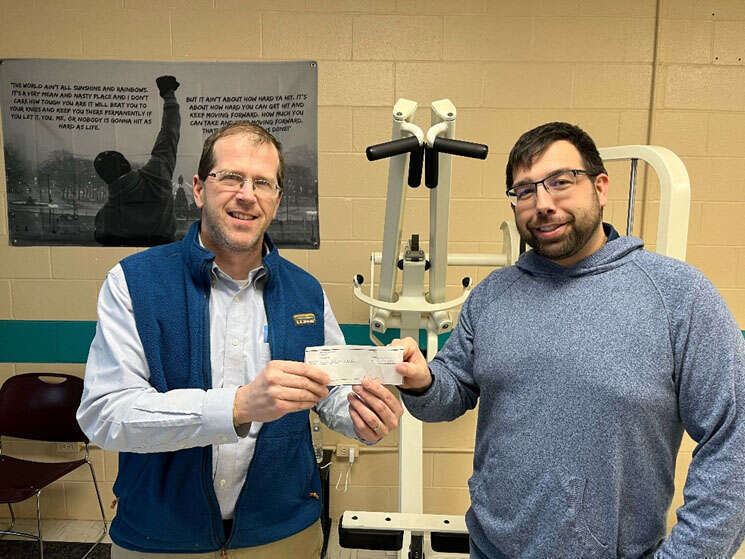 When ABLE Moving Services owner Dale Bailey learned that a new fitness business was coming to town, he wanted to do what he could to support the business.  ABLE Moving Services is a newly established (2019), Baileyville based-business that provides residential and commercial moving services statewide and the fitness business is Down 10 Fitness, LLC, owned and operated by Carl Ripley, also of Baileyville. 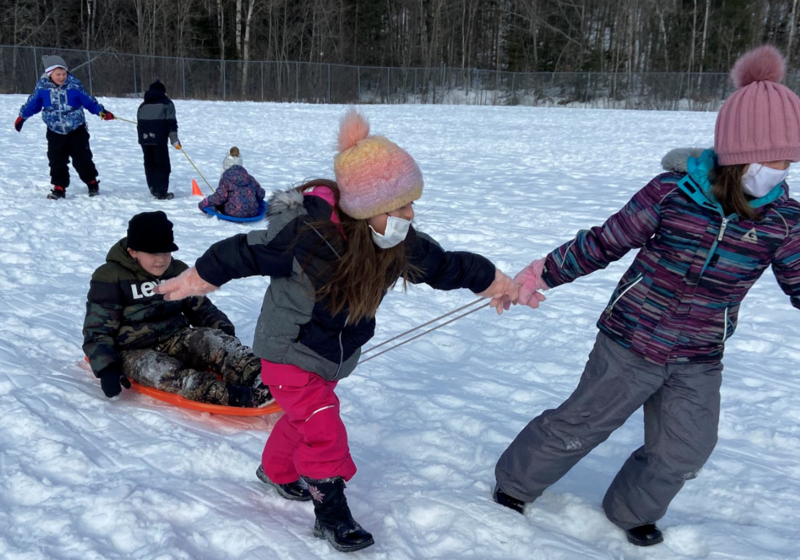 WinterKids is a nonprofit organization in Maine dedicated to increasing outdoor physical activity in children and families, while promoting healthy lifelong habits through education and fun, outdoor winter activity.

This year, Woodland Elementary School was one of only 22 schools chosen in the state to take part in the competitive track of WinterKids. 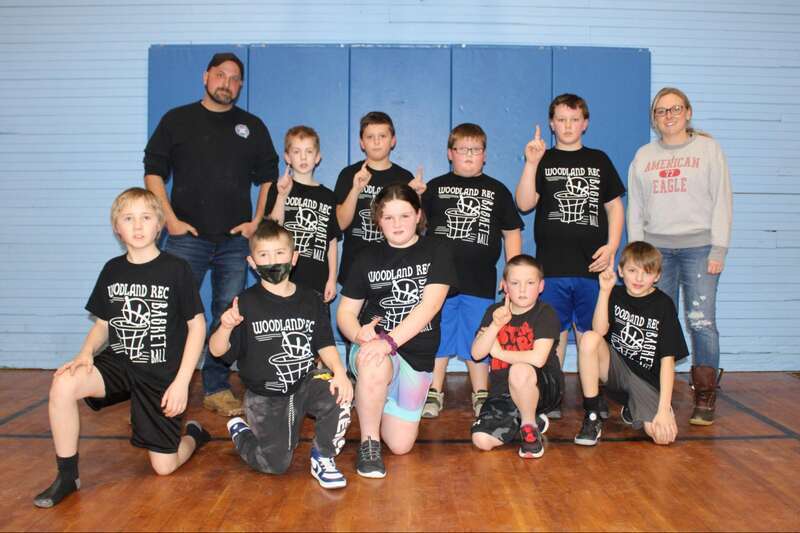 COVID-19 testing continues at the Calais Recreation Center, only with minor changes.
Days of testing have been extended to include Mondays, Wednesdays, and Thursdays.  Testing is available each of those days from 7 a.m. until noon.

The Maine CDC and Department of Health and Human Services are no longer running the testing site.  Now, the City of Calais has entered into an agreement with Curative Labs to provide the testing.

On Sunday, February 6, 2022 at approximately 8:23 p.m. the Maine State Police and the Washington County Sheriff’s Office received a report about a male who had been shot. The information stated that a male identified as 32-year-old Adam Knowlton of Calais had been shot at a residence at 92 South Street in Calais. Knowlton was transported to a local hospital.

The incident is under investigation however Knowlton is refusing to cooperate at this time. Knowlton received non-life-threatening injuries.

Lockdowns, Mandates and Misinformation: Oh My!

Cloth Masks offer little to no protection Against Omni variant 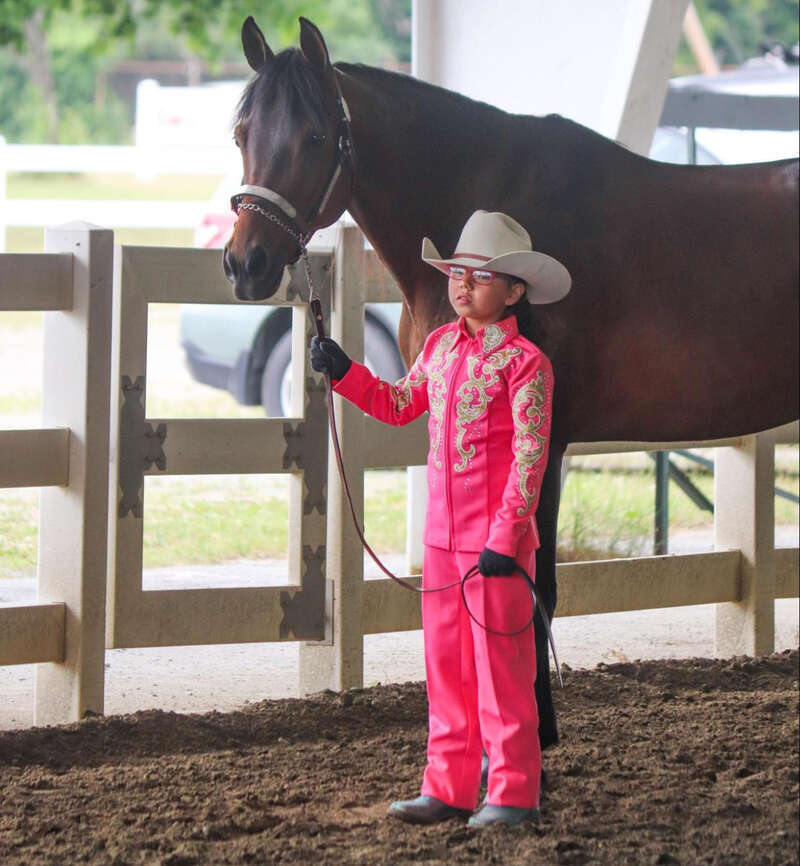 Three young girls from The Future Stars Horse Club at Little Oak Farm in Wesley are looking to their community for help in making their dreams a reality.
They have been busy selling raffle tickets to raise money for a very special trip.  These girls, and their beloved horses, would love to compete in the Morgan Youth Oklahoma Championship Show in October. 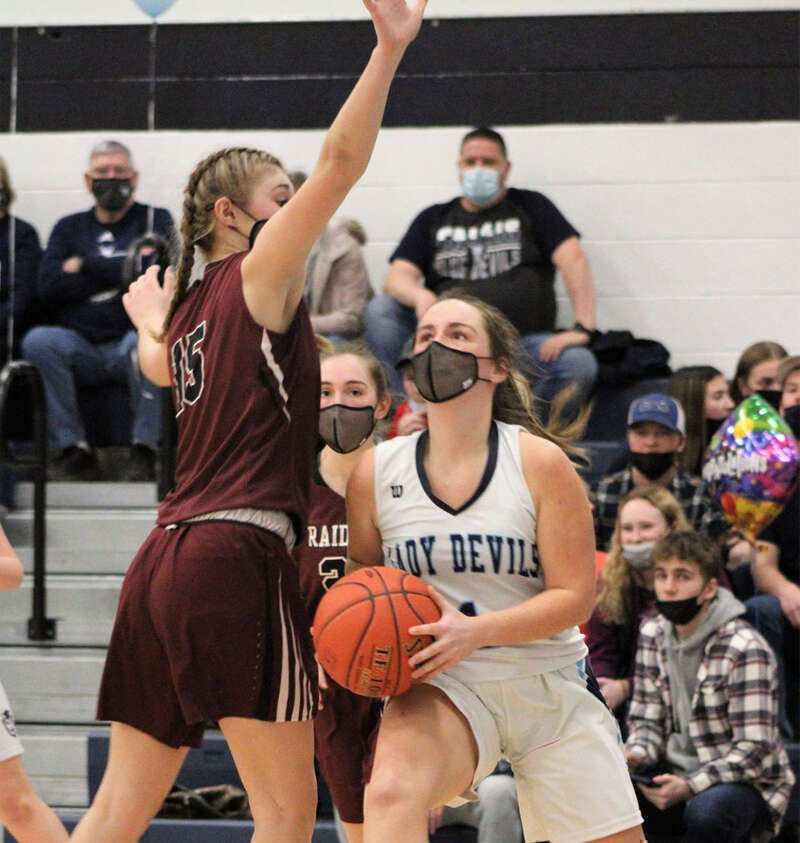 The Calais girls basketball team traveled to Machias last week and found another victory against the Bulldogs with a score of 65-42.
Calais was led by Sage Phillips with 18 points and Nevaeh Thomas with 14.

Kendra Stevens scored another 10 points for the winners, while Trinity Jones and Alexis Donahue each had 8, Kayleigh Scott had 3, and Brenna Critchley and Kate McPhee both added a basket for the Blue Devils victory. 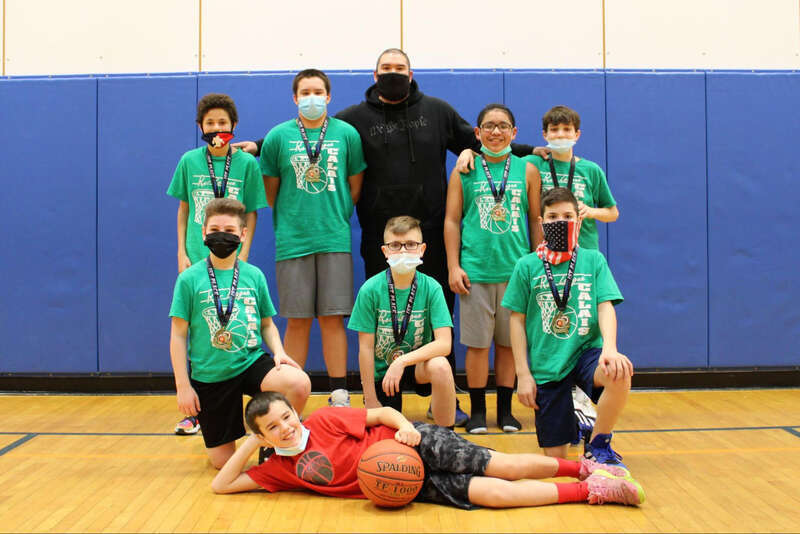 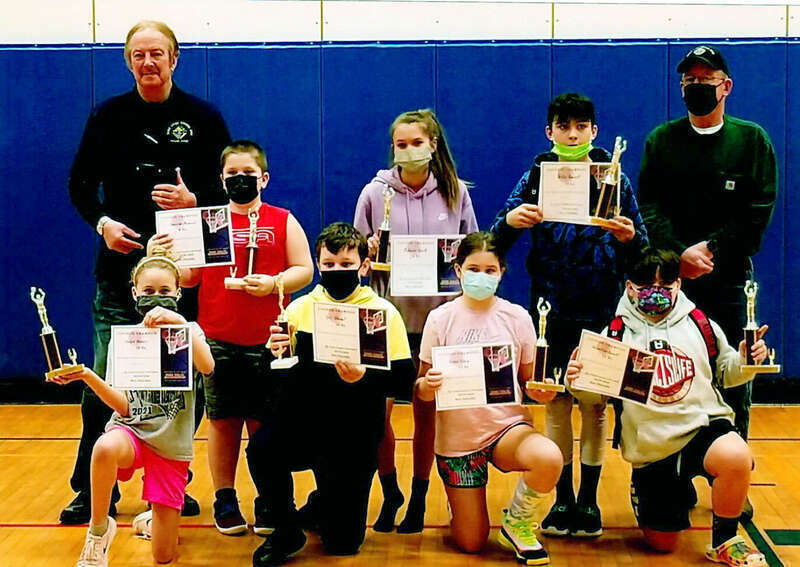 Ten winners from the St. Croix Valley area were named local champions of the 2022 Knights of Columbus Free Throw Championship.  All five boys and five girls have now earned the right to compete at the state level in March.

Each was allowed 25 free throw attempts in the contest.  High score for the day was 18 shots made out of 25 attempts. 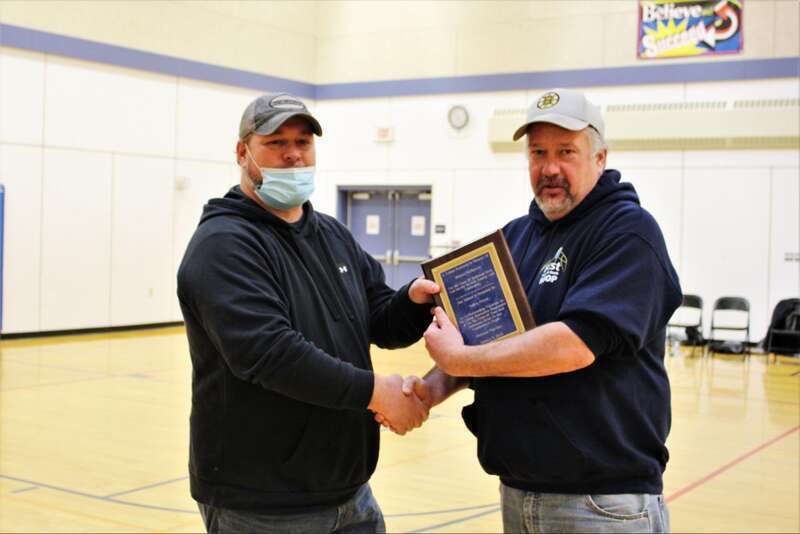 Farrar Recognized for Time and Dedication Given to Community Youth

Calais Parks and Recreation Director Craig Morrison made the annual presentation of the Michael McPherson Award last Saturday.  The award, Morrison told those in attendance, began in 2000 and recognizes a community member who is a vital volunteer at the Calais Recreation Department. 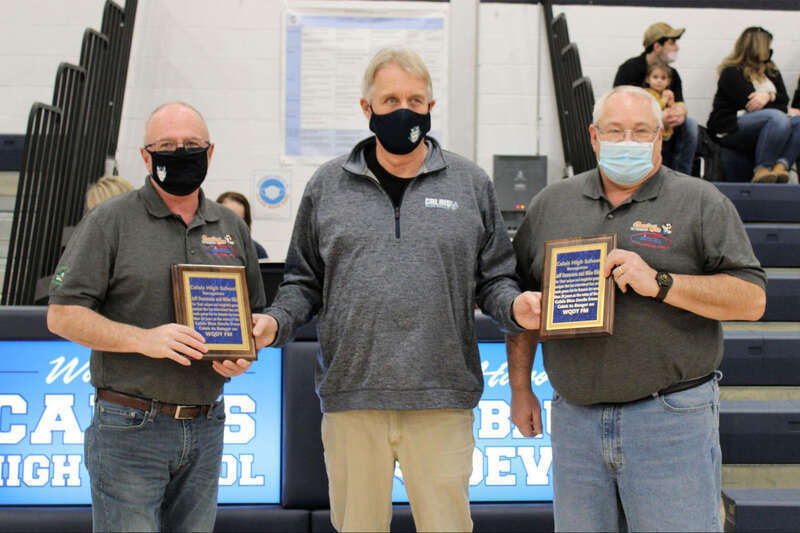 Demmons and Ellis Recognized for Over 20 Years of Game Announcing

On Saturday, February 5, just before the start of the final regular-season home games at Calais High School, athletic director Randy Morrison made a special presentation.  This presentation recognized Jeff Demmons and Mike Ellis, both of whom have been announcing Calais basketball games for more than 20 years on WQDY and who each recently announced their retirements from doing so. 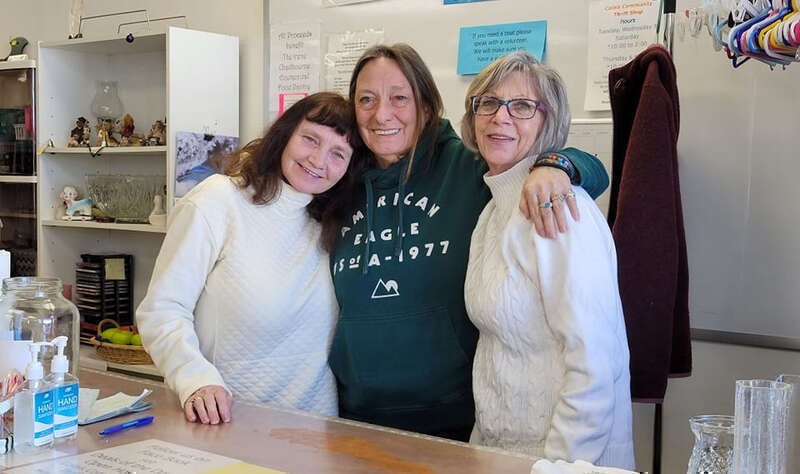 One of the busiest shops on Main Street is the Calais Community Thrift Shop, located next to the movie theater.  Its success, according to volunteer Linda Howe, is because of the continued support it receives from those in the community. 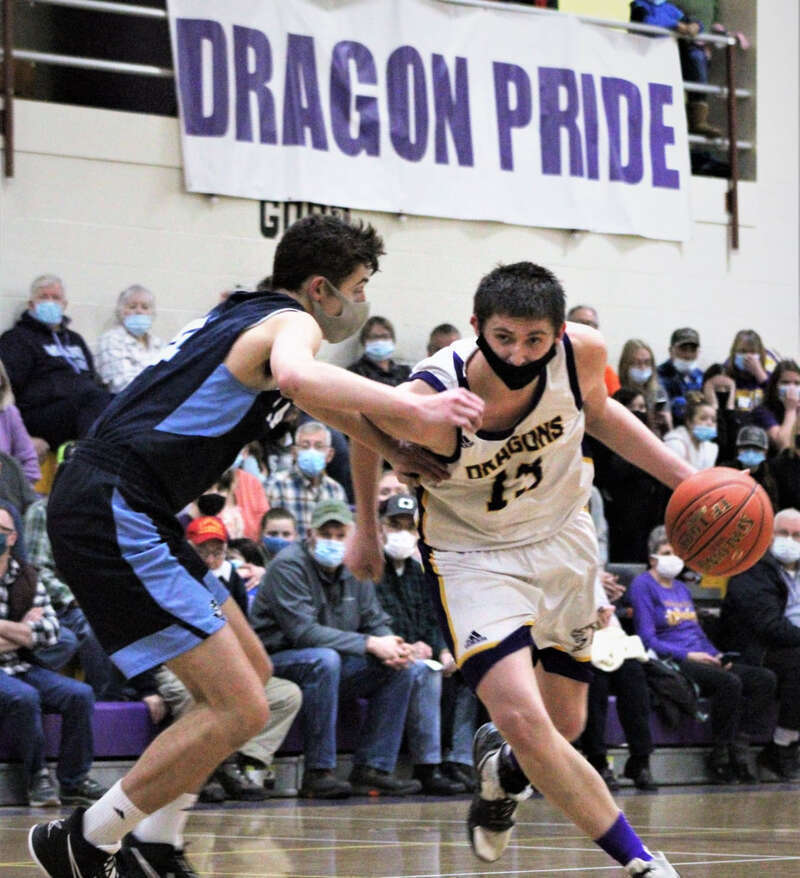 At Woodland on Thursday, February 3, Coach Dean Preston’s Blue Devils were quite possibly considered the underdogs going into the contest, but Calais took the win over the Dragons, 55-39.

Skinny Dana led all, dropping in 18 points to go along with his 15 rebounds for Calais.

February is dream-planting season- planting some garden seeds in the sunroom, dreaming of spring, and planting some political dreams in candidates in boxes, as they collect signatures and plead for campaign donations. Both operations are rooted in optimism, but both are leavened by years of disappointment. Sometimes the promising seedlings get a bit too leggy, or are damaged when exposed to the sun and elements after a swaddled infancy in the warm and protected sunroom. The same can happen to candidates.

In sight for schools is the end of another academic year, as the most normal of the last three years has almost come to a close.  The question that many schools are now starting to ask is when will it be time to remove the masks? 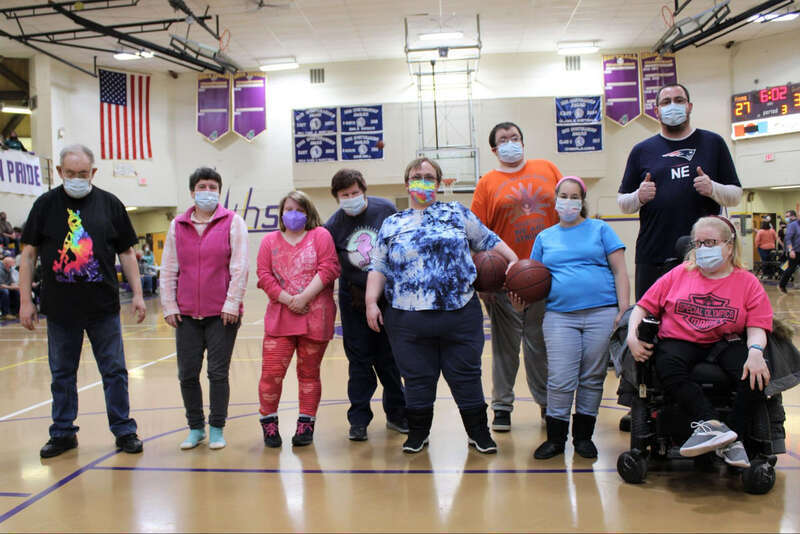 The Beckett Bombers, the Beckett Center’s Special Olympics team, did not participate in any games this year.  Still, the group practiced hard and even got to show off their skills during halftime of the Woodland/Calais girls’ game last week.  As well, at that game, the Bombers joined the Lady Dragons in the lineup as the starters were announced.  Team members include Kim, Denise, Annie, Anne Marie, Linda, Bob, Bo, Matt, and Cassie.  (Photo by Jayna Smith) 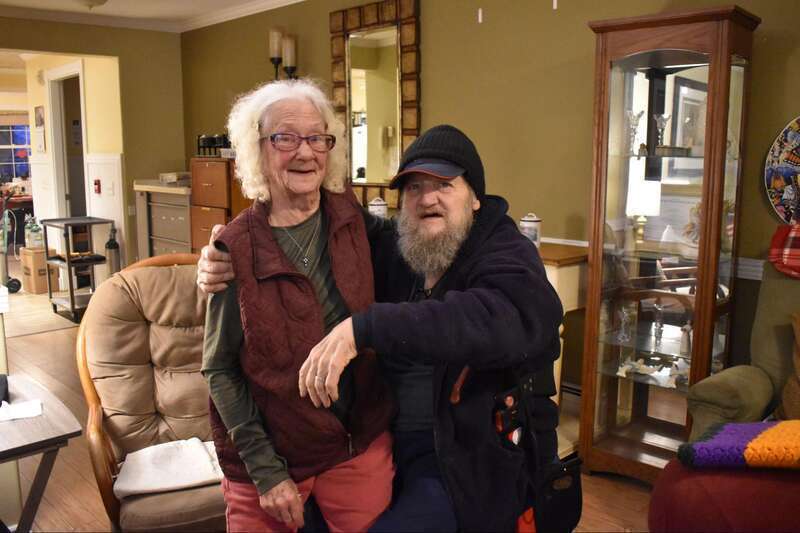 L♥ve at Any Age

Some may think that there is a deadline on finding love and movies on television and in theaters often reinforce this idea. But just across town on South Street, two residents at the assisted living facility learned that love is more than just the numbers that follow your birthday. 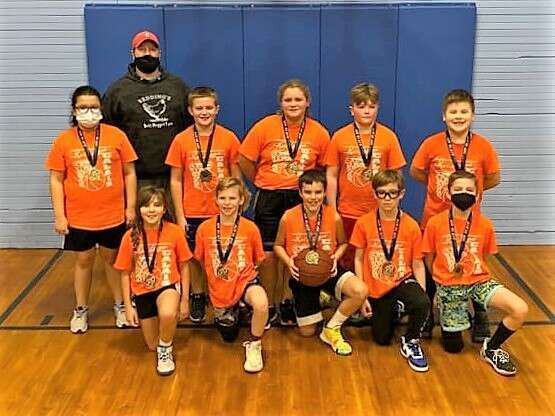 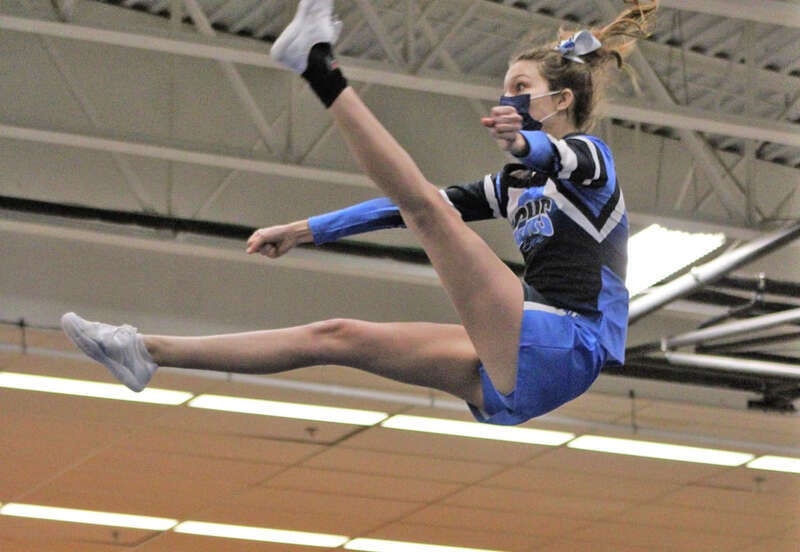 The Calais High School cheerleaders, coached by Heidi Braughton, have been back on the sidelines this year after COVID-19 halted them last season.  With the enthusiasm and cheers they bring, they have not disappointed the Blue Devils fans.

At a town meeting on Tuesday, February 8, Princeton residents came out and proved in support of the town joining Downeast Broadband Utility (DBU) with a unanimous vote, 36-0.

DBU is the first of its kind, non-profit, open-access fiber optic municipal utility network in the state.  It provides high speed internet, phone, and TV through a dark fiber network to businesses and residences in towns which are members. 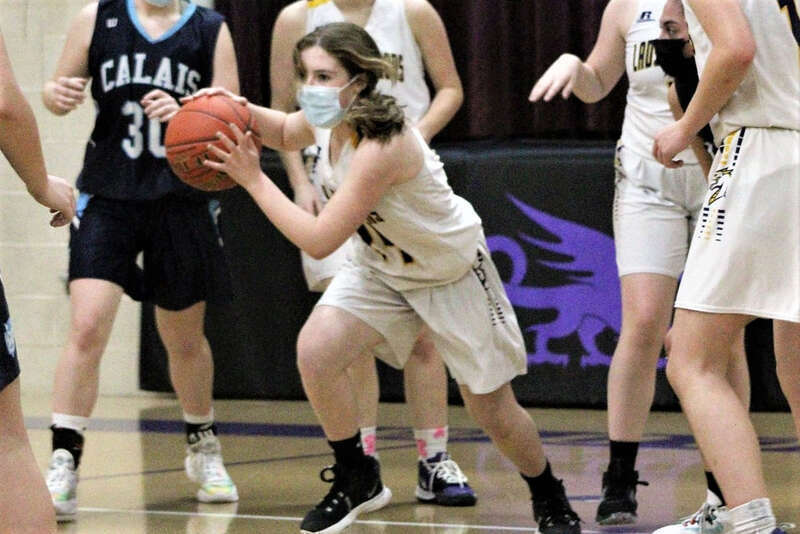 Calais played Woodland at Woodland in their last regular season game last week.  The Lady Devils claimed the victory with a score of 57-48.

Calais was led by Nevaeh Thomas with 15 points and Alexis Donahue with 14.

Brenna Critchley and Sage Phillips each added 11, while Kendra Stevens and Mercedes Owen each added 3. 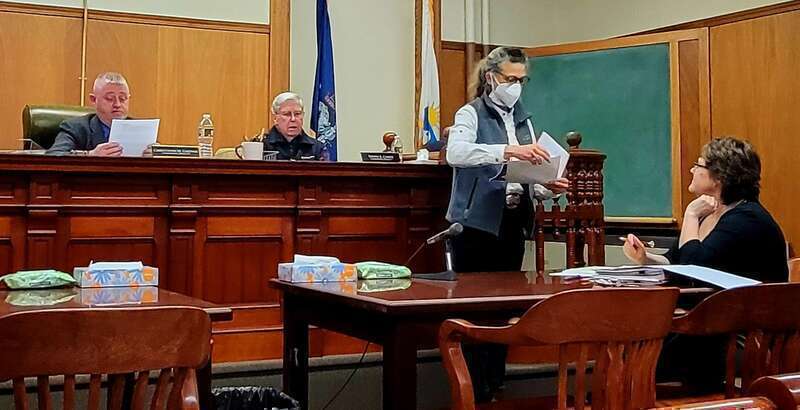 Healthy Acadia’s Food Program Manager Regina Grabrovac was the first to present at this month’s meeting of the Washington County Commissioners, held Thursday, Feb. 10, at the county courthouse in Machias.

Grabrovac, who is well known throughout the county for her work on behalf of food security and Downeast farmers, attended the meeting to deliver a Healthy Acadia proposal that would create a community gardening project on county land. 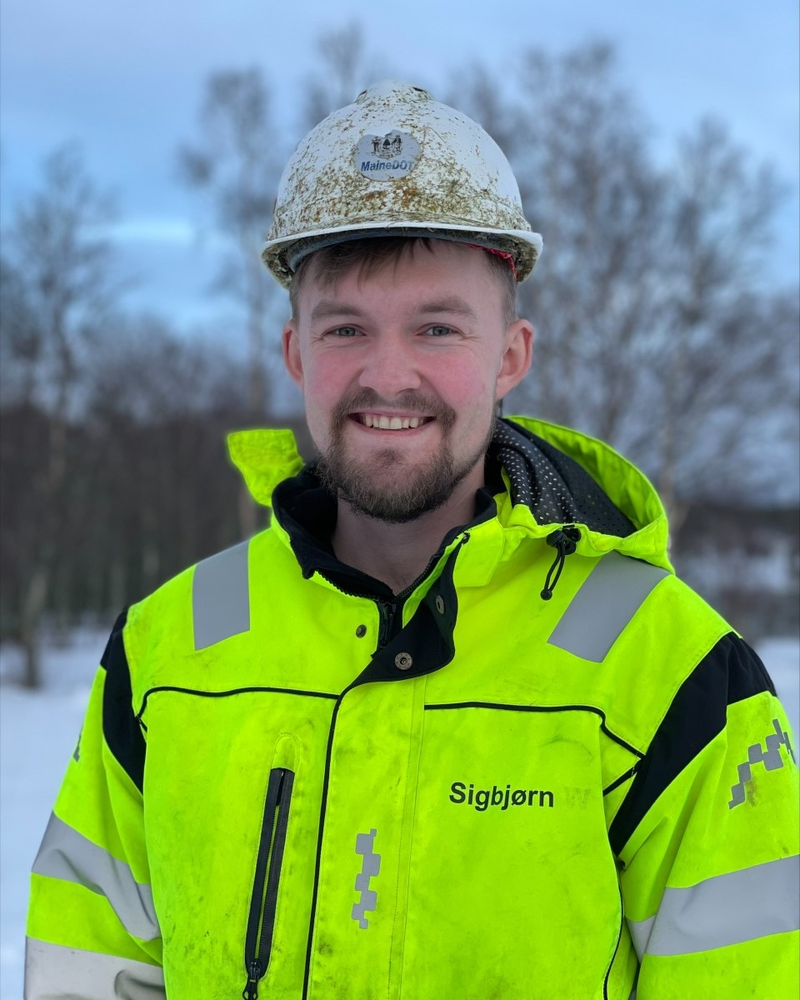 Beachcombing can yield neat and interesting items of all kinds, but for one man about 3,300 miles away, his beach find originated from the great State of Maine.

Back in August, Sigbjørn Eide, who resides in the Nordic country of Norway in Northern Europe, was working his first day as a beach cleaner.  On the beach, he discovered a hard hat with markings indicating it belonged to the Maine Department of Transportation (DOT). 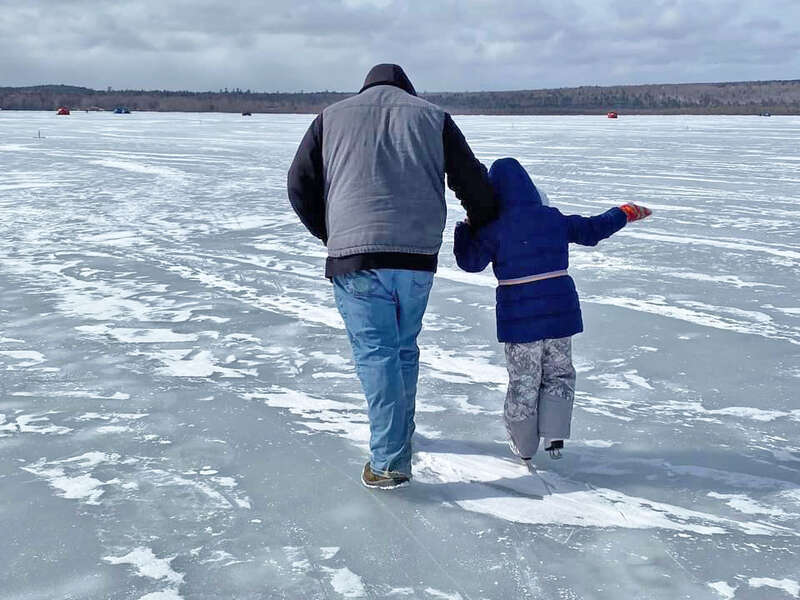 On Saturday, February 19th, the Dennysville Snowmobile and ATV Club hosted their Free Annual Family Fun Day.
Community members gathered at the Calais Rod and Gun Club in Charlotte at 9 a.m. to participate in some fun winter activities.

A fishing derby took place along with a joker run on the lake, trucker rides, hill sliding, and an ice fishing package was raffled off. 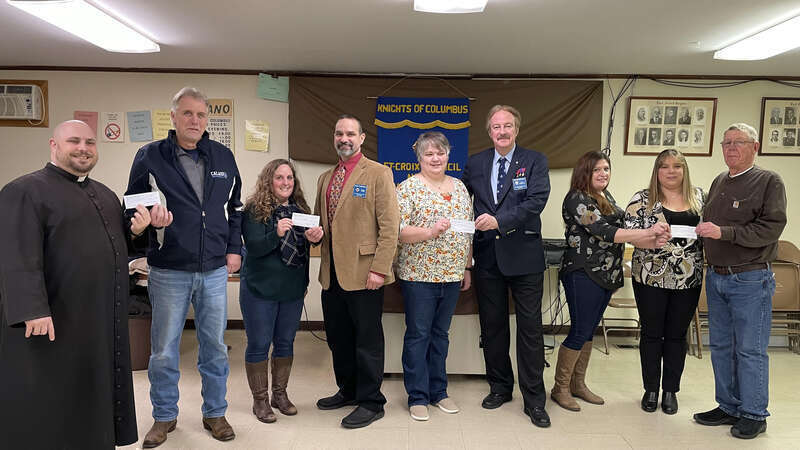 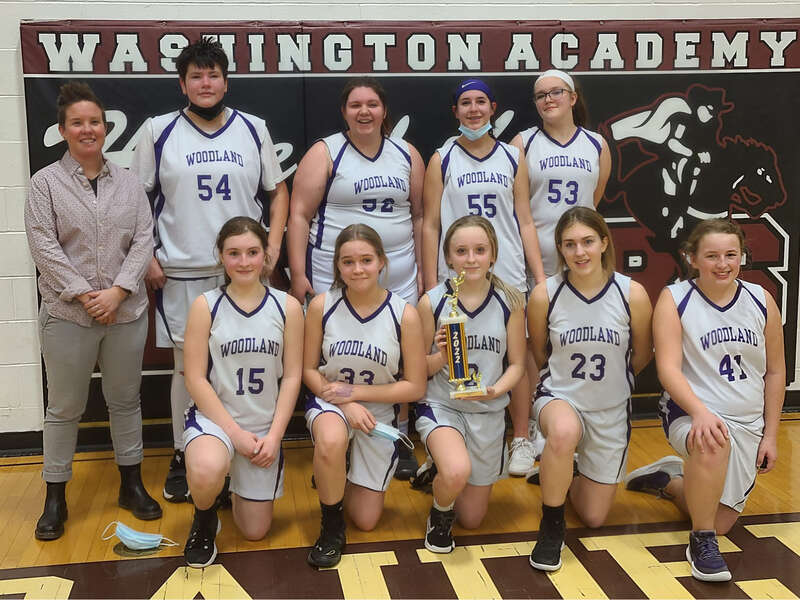 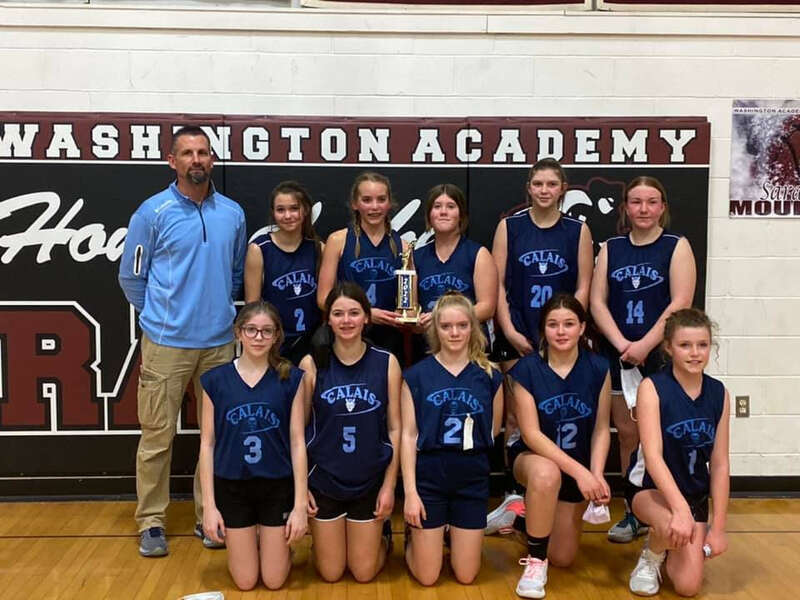 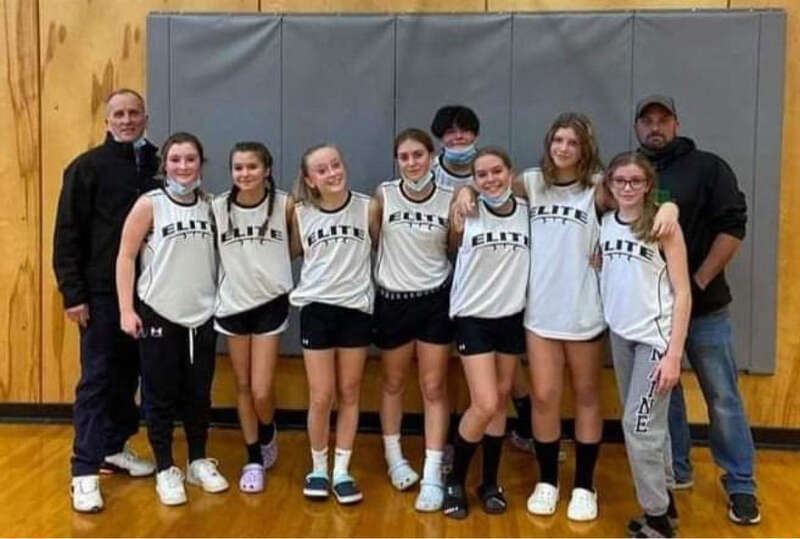 Woodland Parks and Recreation had a girls’ grades 7 and 8 travel basketball team this year, as well as a boys.’  The two teams played as part of the Eastern Maine Basketball League.

The Eastern Elite girls team, made up of a group of girls from various local schools, proved they can keep up with the larger-area teams, playing against teams from Orono, Ellsworth, and others. 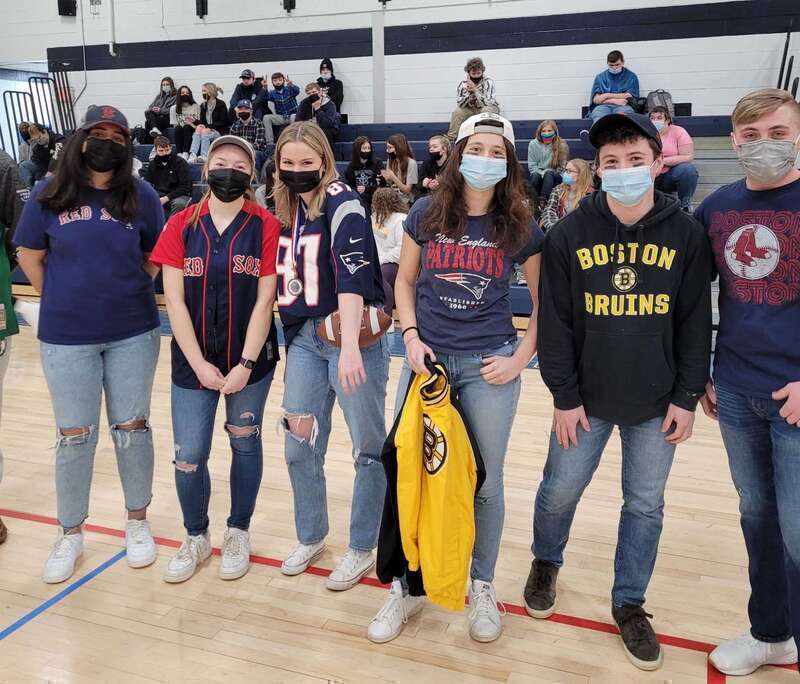 The annual winter carnival at Calais Middle/High School was held last week with many fun events for the students and staff.

Student Council hosted a bonfire with free hotdogs and burgers on Monday night to kick off the week of exciting competitions among grades.  Calais Fire-EMS was on-site, helping to keep all safe. 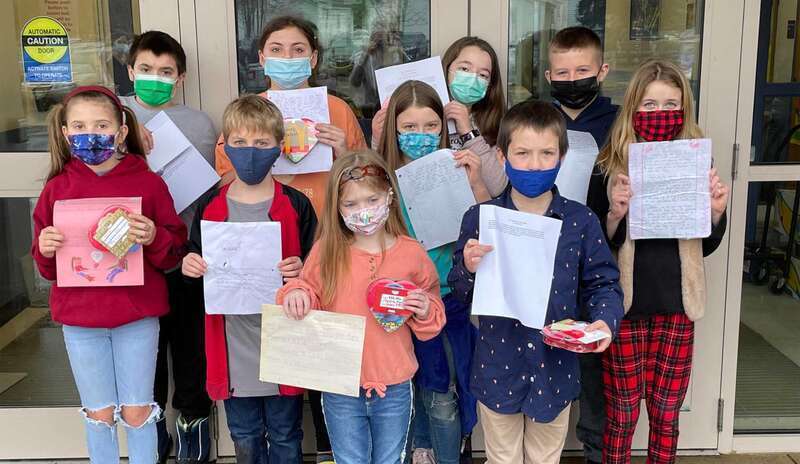 Students at Calais Elementary School recently had the chance to win a gift certificate to their favorite area restaurant, thanks to a competition held by the Calais PTO.