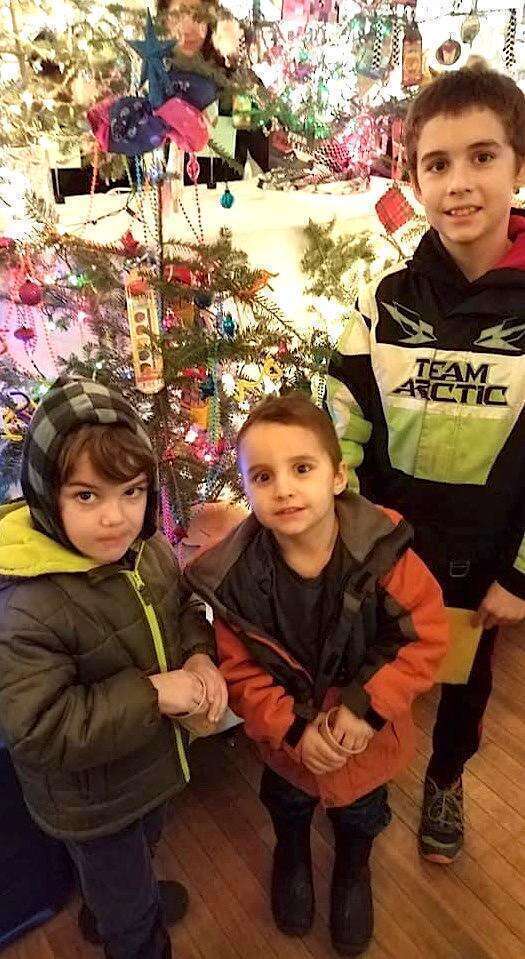 Organizers of Eastport Arts Center's 13th Annual Festival of Trees are thrilled to have received the names and themes of this year's trees, as follows. In addition to the ‘main event’ of lovingly decorated tabletop trees available by silent bid, the event will feature a ticket raffle of gift-worthy items donated by local individuals and groups, live music, and take-out snacks. The event will be held from 4:30 to 5:30 p.m., Saturday, December 10, and is a key fundraiser for the Center’s year-round programming for all ages. 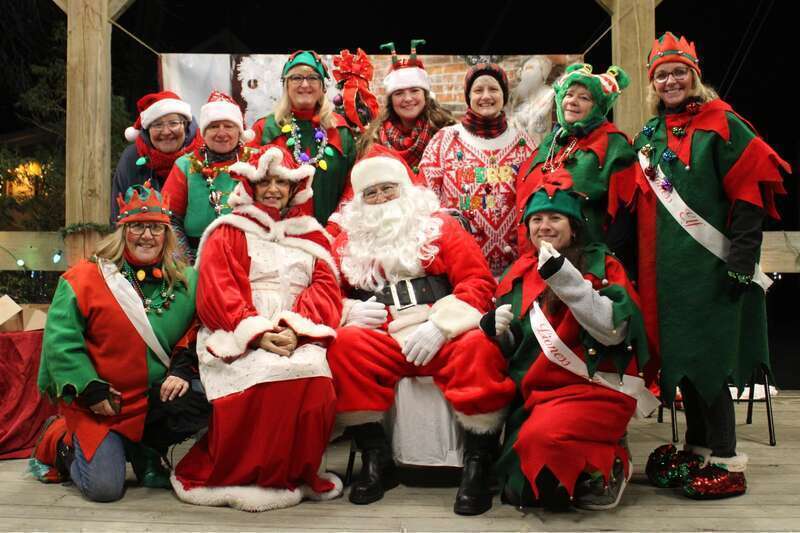 Lioness and Santa Bring the Magic of Christmas 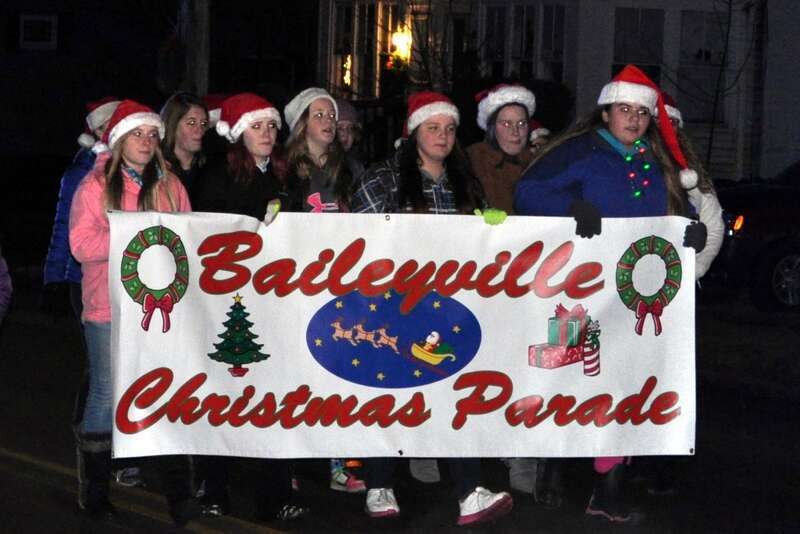 The village of Woodland will be bustling on the evening of Friday, Dec. 9th with kids–and kids at heart–awaiting Santa’s early arrival as he makes his way in the town’s annual Christmas parade. 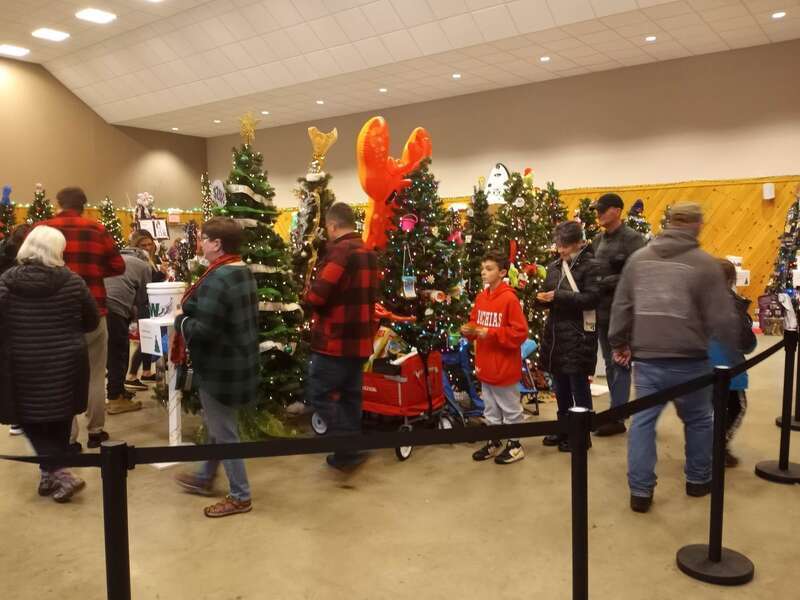 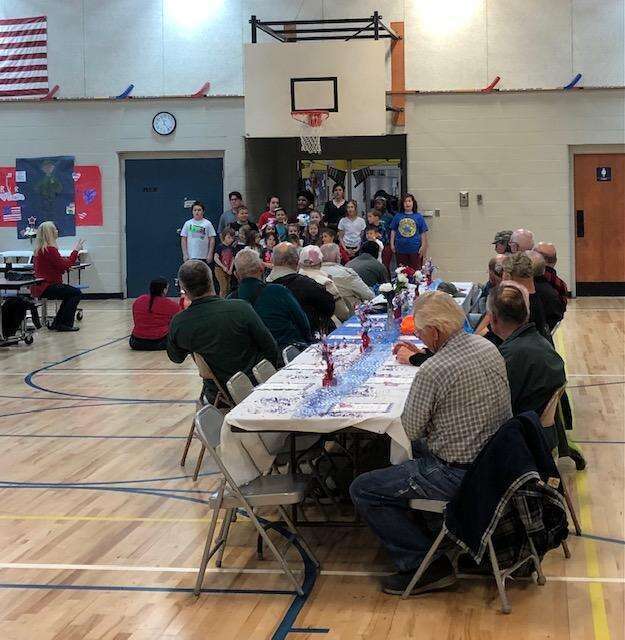 Last month, the day before Veterans Day, Topsfield’s East Range II students held a Veterans Day Luncheon to honor our local veterans from all branches of the military. We had a wonderful turnout and students sang songs, passed out homemade thank you cards, and helped serve lunch to our veterans. We appreciate all veterans and are grateful for your service! 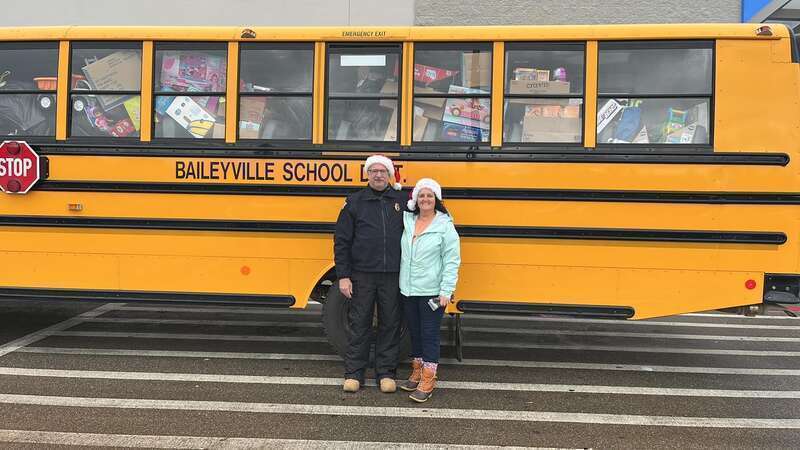 Spirit of Giving Proves Strong at Stuff the Bus Event

What is a joyous time of year for some is also a time of great stress and anxiety for some as the temperatures fall, yet prices on nearly everything have risen.  This leaves many wondering how they will pay for home heating fuel and keep their lights on, all while ensuring their families are kept warmly clothed and fed, with Christmas quickly approaching on top of all of that. 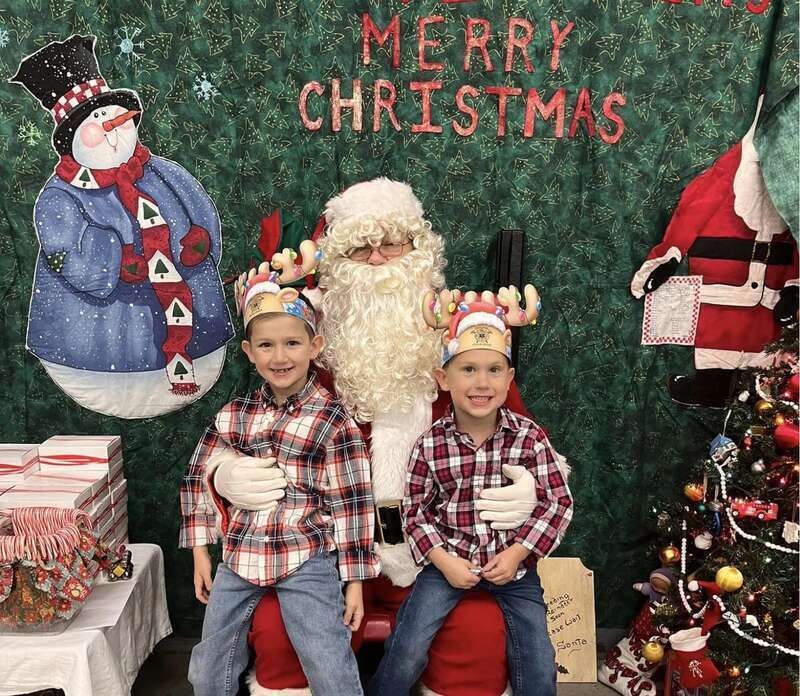 On Saturday morning, Santa made his annual visit to the Calais Fire Department.

There, with some help from Calais Fire Association members, kids had the chance to not only meet with Santa, but also explore the fire trucks.

Even more, each child got to decorate cookies to take home and each received a present from Santa. 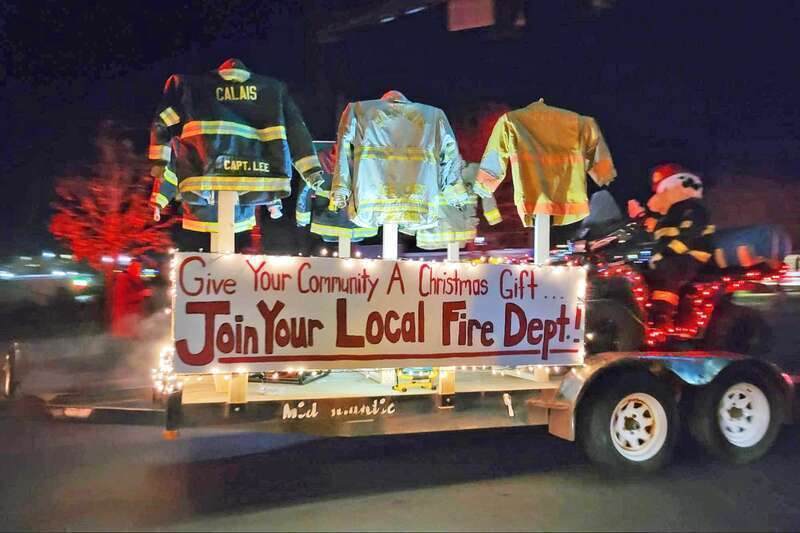 Calais Fire-EMS’s Lioness Christmas Parade entry displayed an important message, encouraging men and women to join their local fire department.  The float was just one of many in this year’s parade, the largest Christmas parade yet, which drew hundreds to downtown.  (Photo by Jayna Smith) See more photos in this week's The Calais Advertiser! 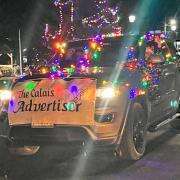 Several stories came across my laptop as 2022 wanes. They were not much mentioned by the legacy media, or they were spun as overwrought conservative conspiracy theories.

• Governor Mills seeks to regulate and muzzle the less than obedient press. 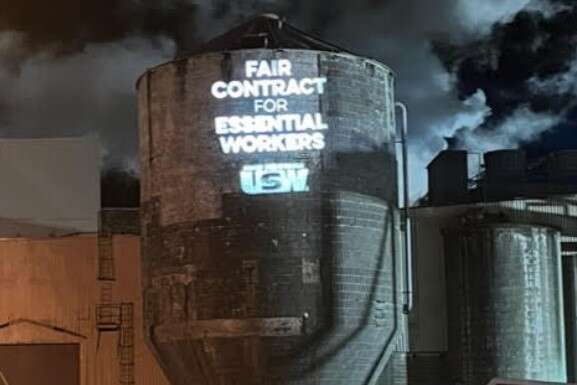 USW Local 27 members at Woodland Pulp in Baileyville have voted to reject the company’s recent contract offer and have authorized to strike.

Voting among the union members took place on December 5 and 6, and according to USW Local 27 President Shawn Howland, 85 percent of the over 90 percent of members who voted showed approval of the strike. 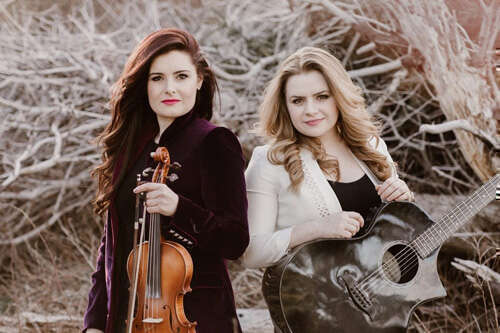 Calais Celtic Concerts is pleased to present the internationally-acclaimed, award-winning, musical sister-duo of Cassie and Maggie MacDonald, who are no strangers to Celtic Christmas, Holiday Magic!

Part of a multigenerational musical dynasty, Christmas was always a time to gather near and sing boisterously, as in days of old. The doors were always open to company, and the New Year was just around the corner. 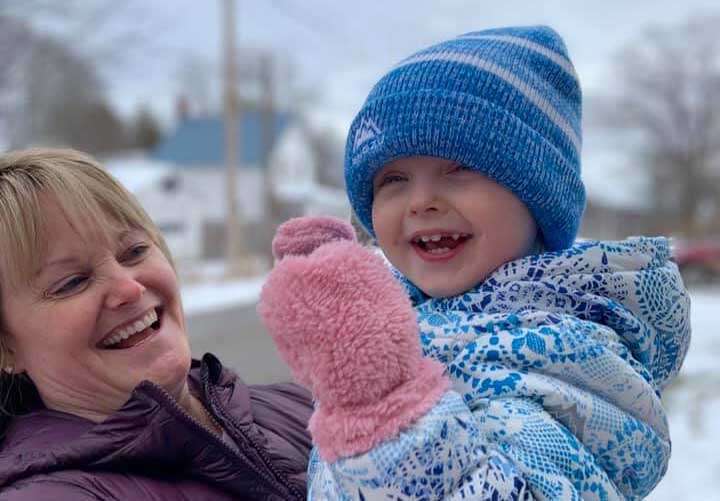 Santa has already made one stop in Baileyville when he visited for the town’s annual Christmas parade last Friday night, but now he is set to return once more before his big trip on Christmas morning.

According to Baileyville Holiday Committee member Jamie Bohanon, Santa Claus will be taking a cruise around town with the fire department beginning at 11 a.m. this Sunday, December 18. 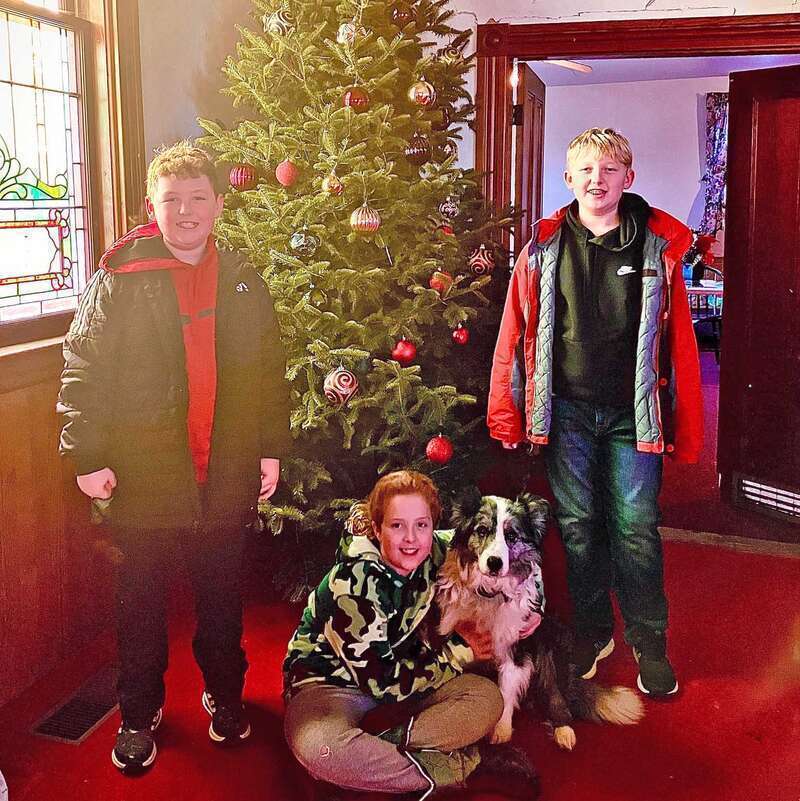 There will be no church services on Sunday, December 18th or the 25th. We will have services on January 1, 2023, with Pastors Ron and Colin Windhorst.  Ann Carter makes singing easier with her piano playing.

Mary Crossman does a great job with the children. Last week they decorated the tree and church and had help from their dog Spur.

We sent a thank you to Johnson's Tree Farm for their donation of the tree. 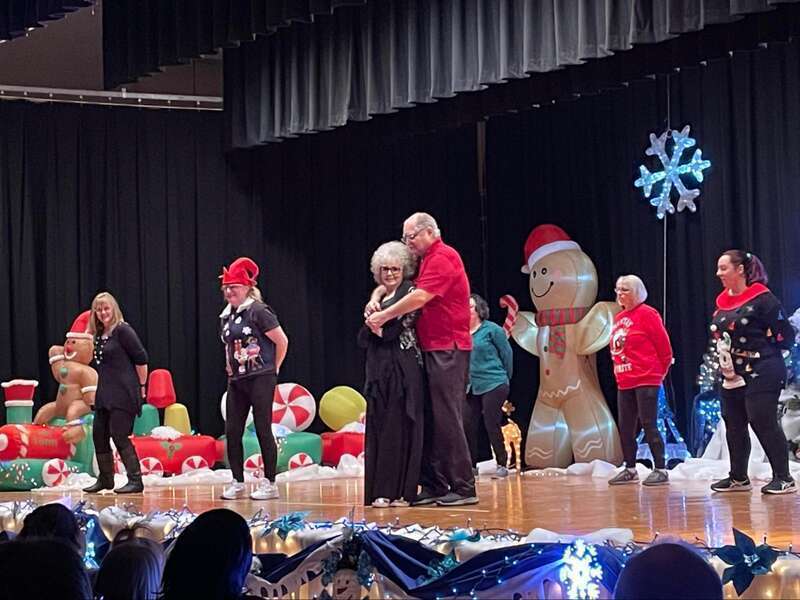 Jose and Barbara Lara joined dancers on the stage to perform a line dance as part of the annual Christmas show. (Photo by Natalie Boomer) 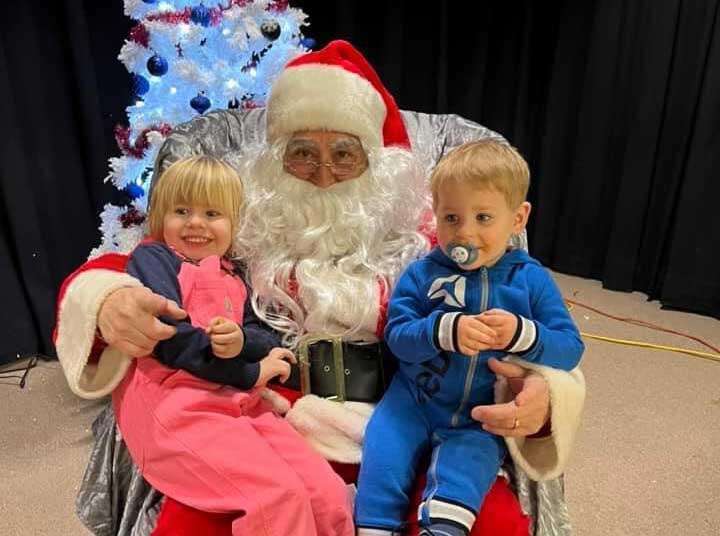 The Village of Woodland was bustling last Friday night, December 9, as Santa made his way through as part of the town’s annual Christmas parade.

According to Jamie Bohanon, one of the organizers of the event, parade entrants did not disappoint with their festive displays of brightly-colored lights and holiday decor. 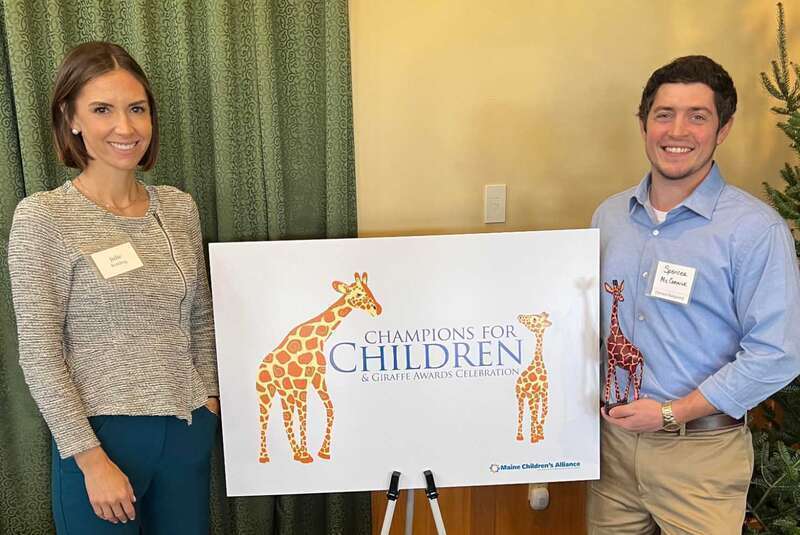 Each year, the Maine Children’s Alliance hosts the Champions for Children event to celebrate Mainers making a difference in the lives of Maine youth. This year, Spencer McCormick was one of six recipients of the Giraffe Award, which recognizes and celebrates the unsung heroes that “stick out their necks” for Maine kids.

McCormick was nominated for the Giraffe Award by Julie Redding, who recognized all he does for the community and its youth. 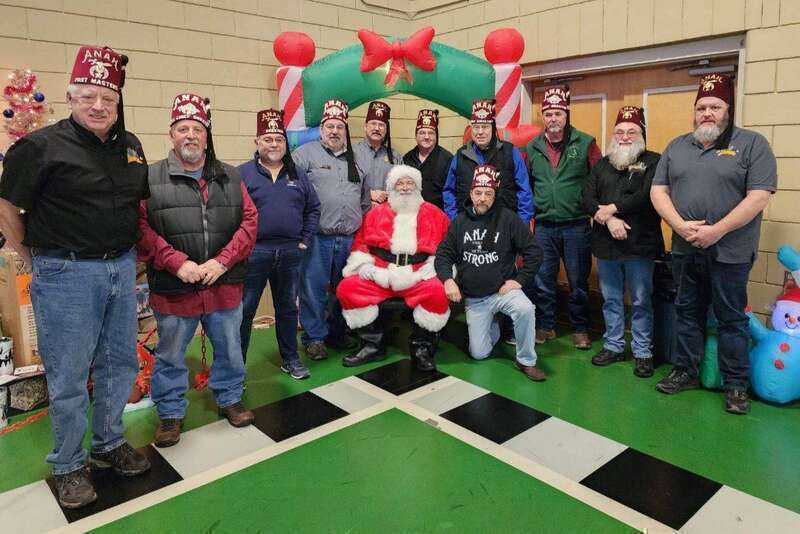 Highly-anticipated International Feztival of Trees did not Disappoint

Always a highlight of the Christmas season since it began in Calais in 2016, with the exception of 2020 when it was halted by the pandemic, the International Feztival of Trees was an impressive sight for all who attended last weekend.

My maternal Grandfather was born in 1898 in Brooklyn, New York and named Abraham Lincoln Plaut by his German –Jewish immigrant parents. His father was a kosher butcher and he became an entrepreneur, author, English teacher and baseball coach. He idolized Woodrow Wilson, but nobody is perfect. He taught me pinochle, bridge, baseball and how to read a financial statement. His best gift was Yiddish, which linked me to my ethnic immigrant past and gave me a rich lexicon of expressions still serving me all these years later. 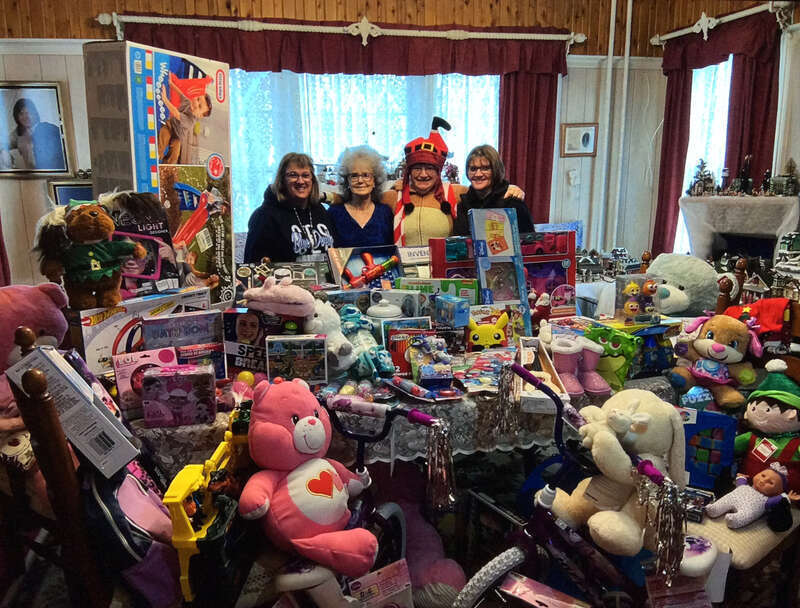 At the City Council meeting on Wednesday, December 16, 2022, Airport Committee members Ron DeFilippo and Colleen Dana-Cummings presented a proposal to the City Council titled “An Opportunity For All of Eastport.” 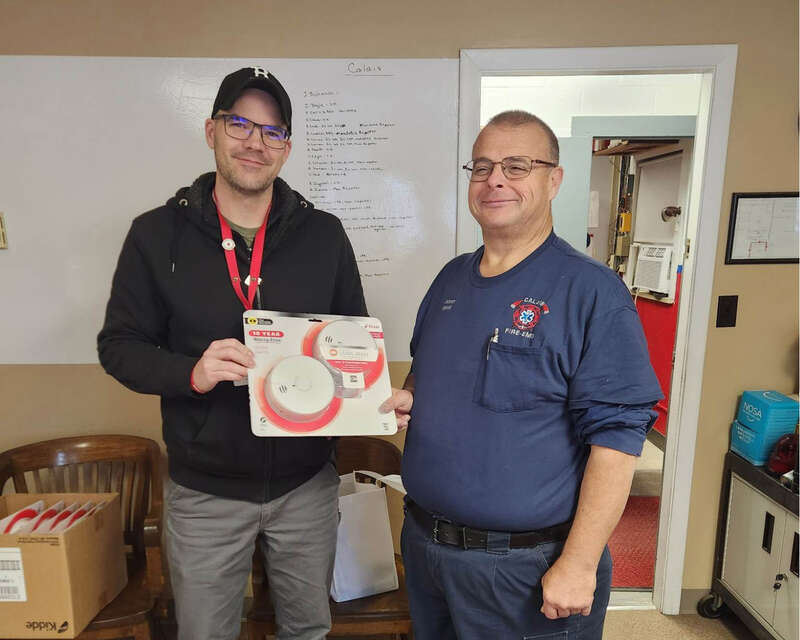 Calais Fire-EMS, thanks to the Red Cross, has new smoke detectors available for locals.  Red Cross Disaster Program Manager David Brown made the delivery on Monday.

According to Calais Fire Chief Bill Lee, Lt. Kevin Ingersoll reached out to the Red Cross regarding its Sound the Alarm program.  Through this program, the Red Cross provided the fire department with the new smoke detectors, available to anyone who needs one. 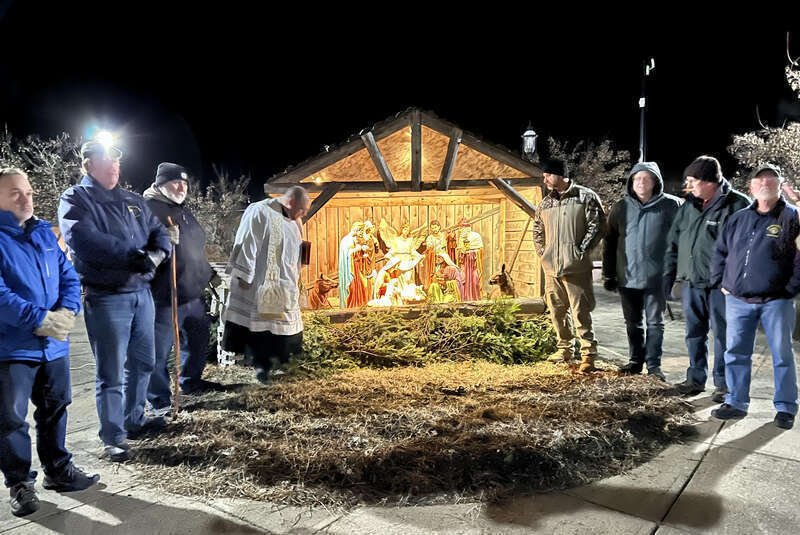 Dedication and Blessing of the Downtown Calais Manger Scene

For the fifth straight year, Knights of Columbus has placed a nativity Manger in the downtown area of Calais to remind everyone of the true meaning of Christmas. Pictured are (left to right) Knights Aaron Morris, Tom MacDonald, Michael Boies, Father Brad Morin, Marc Podschlne, Pierre Little, Ed Stover, and Gary Madore. (Photo by Wendy Little) 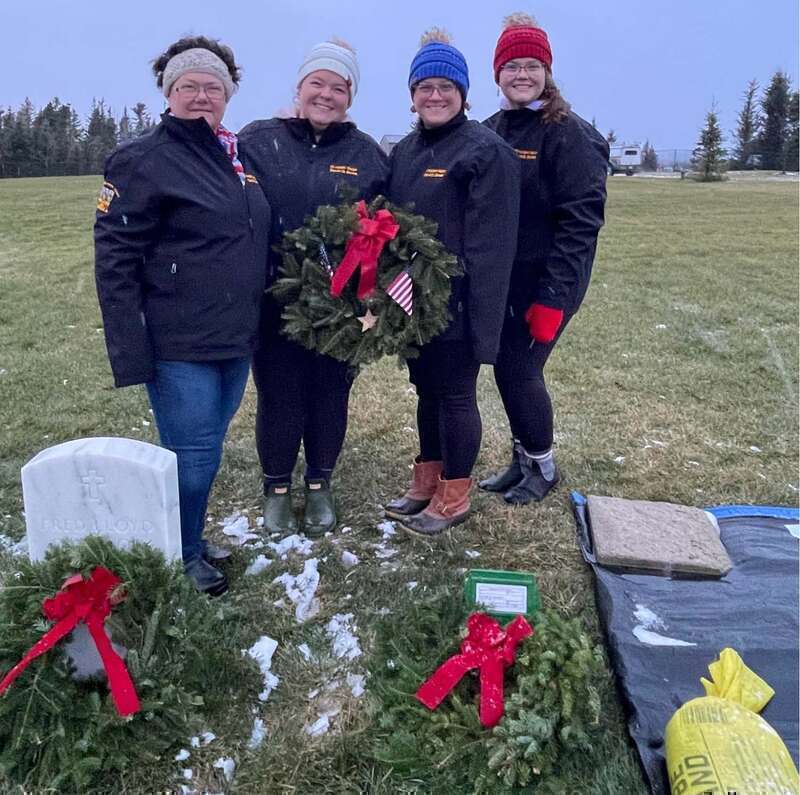 Submitted by the Sivret Family

The mission to Remember, Honor, and Teach is carried out by coordinating wreath-laying ceremonies at Arlington National Cemetery, as well as at more than 3,400 additional locations in all 50 U.S. states, at sea, and abroad. The annual placement of wreaths took place on Saturday around the world, however, because of the weather on December 18, volunteers gathered at Acadia National Cemetery in Jonesboro for National Wreaths Across America Day. Currently, 48 soldiers and spouses are laid to rest at Acadia. 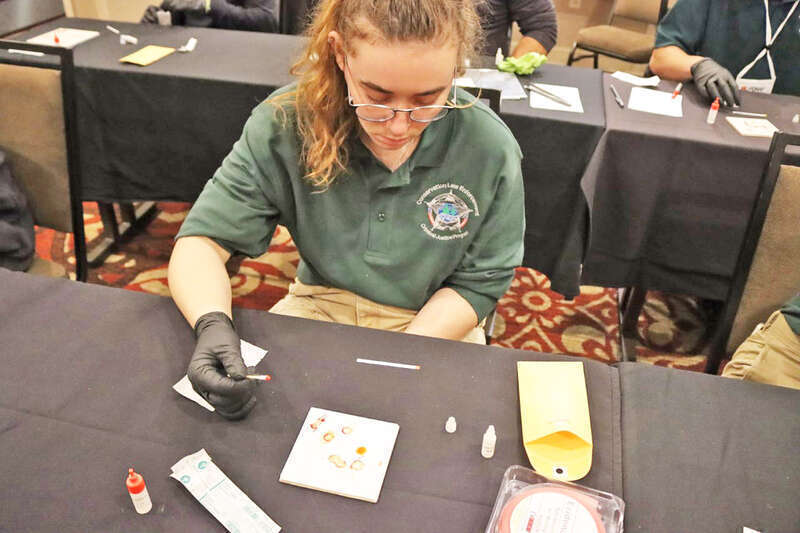 Four Criminal Justice students from Washington County Community College were chosen to attend the 28th Annual NEDIAI, or the New England Division of the International Association of Identification.

Taylor LeBlanc, Rose Adams, Mackenzie Hewitt, and Connor Cook were chosen by Criminal Justice and Conservation Law Instructor Wayde Carter and Jason Fowler of the Maine State Police and adjunct professor at WCCC. The two came together to choose these four students based on their academic performance and professionalism. 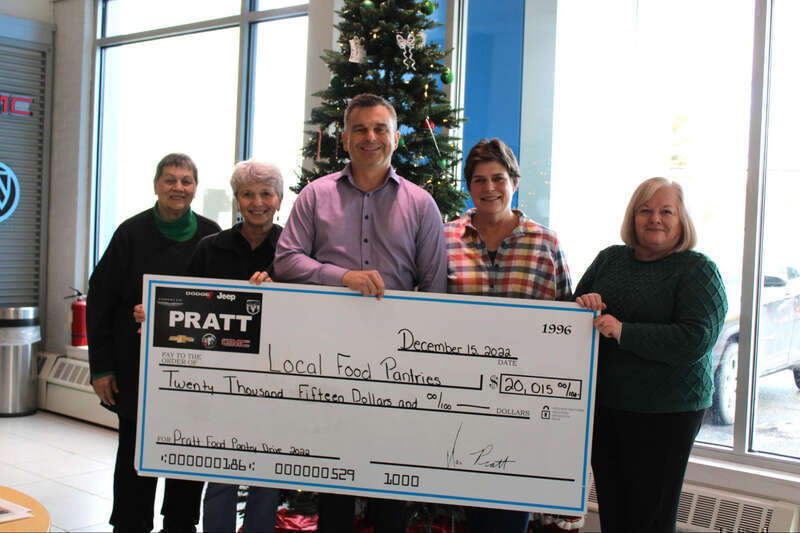 $20,000 Brought in for Local Food Pantries by Annual Pratt Campaign

For over ten years, Ian Pratt at Pratt Cars has held a donation-match campaign throughout the month of November that helps bring in needed funds to area food pantries.  His idea came to fruition after realizing how great the needs are for the pantries in Washington County. 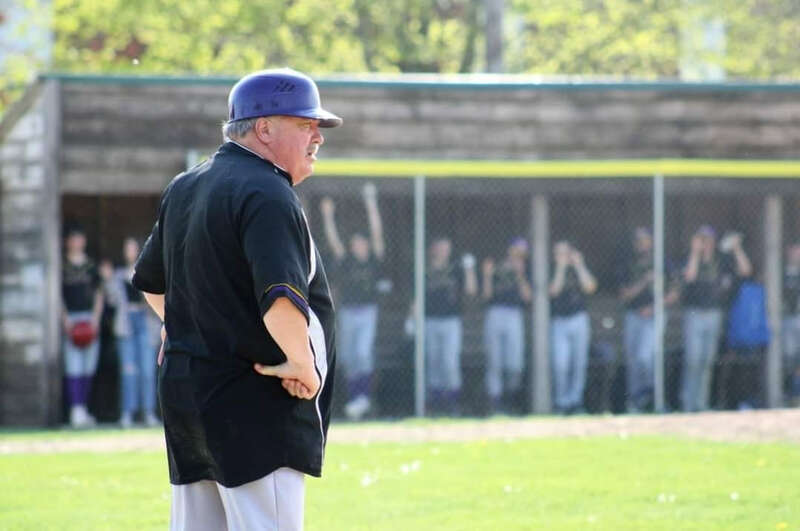 Woodland High School baseball coach Kenny Murphy passed away unexpectedly on December 12, 2022, and on Saturday, December 17, 2022, a Celebration of his Life was held at Calais High School.

On one side of the gymnasium at the front was a sight that could not be missed:  a sea of black, purple, and gold caps and jerseys, all donned by members of Murphy’s baseball team. 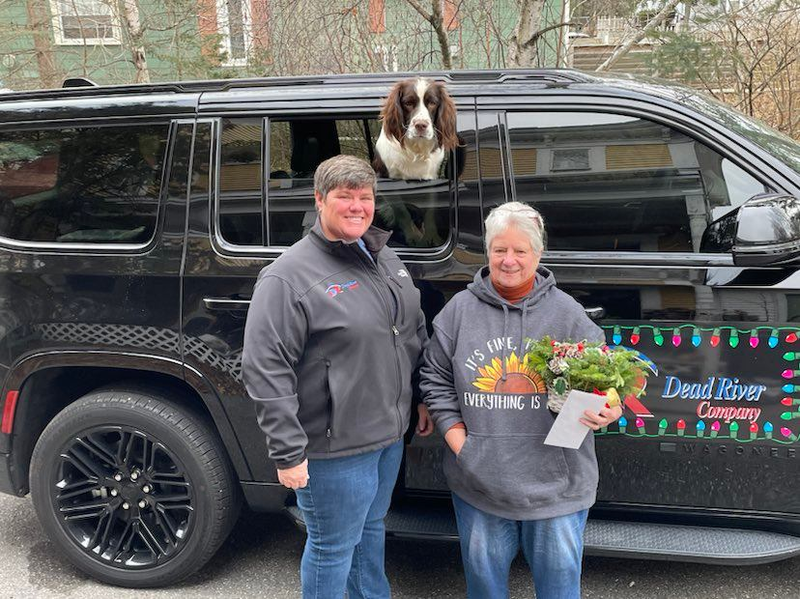 The Calais branch of Dead River Company recently held its first “A Tank Full of Thankful” contest.  The contest took in over 1,100 entries, all hoping to win one of ten $500 gift certificates to use to help heat their homes.

Twas the Week Before Christmas

With apologies to Clement Clarke Moore and any non-cynics left

'Twas the week before Christmas, and all through the House

The lame ducks were plotting, preparing to pounce;

The earmarks were hung on the omnibus with care,

Angus and Susan nestled snug on the Floor,

With visions of earmarks hung on the door;

And Chellie in her Pingree, and Jared in his flannel,

Had just settled down for a lobster regs panel. 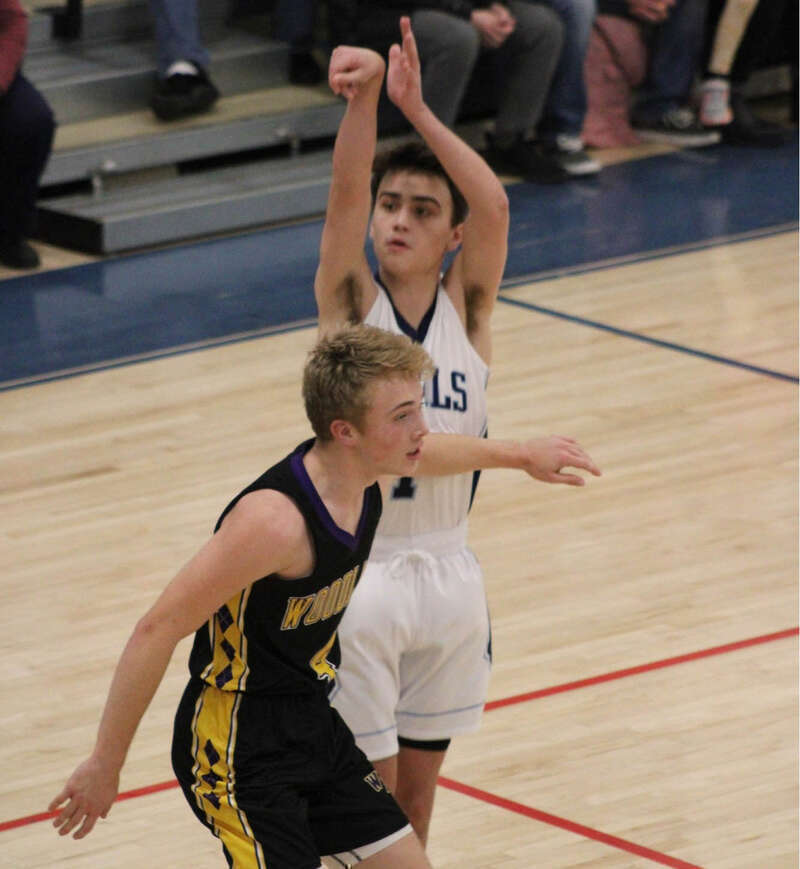 The Warriors, coached by Cliff Urquart, have appeared in the last four state championship games, claiming the gold ball at three of them.

Coach Sean Cavanaugh said, “Southern Aroostook showed they are still a force and gave Calais their second loss.”  The final score of the game was 73-23.

Calais City Council held its only meeting of the month on December 15, 2022. 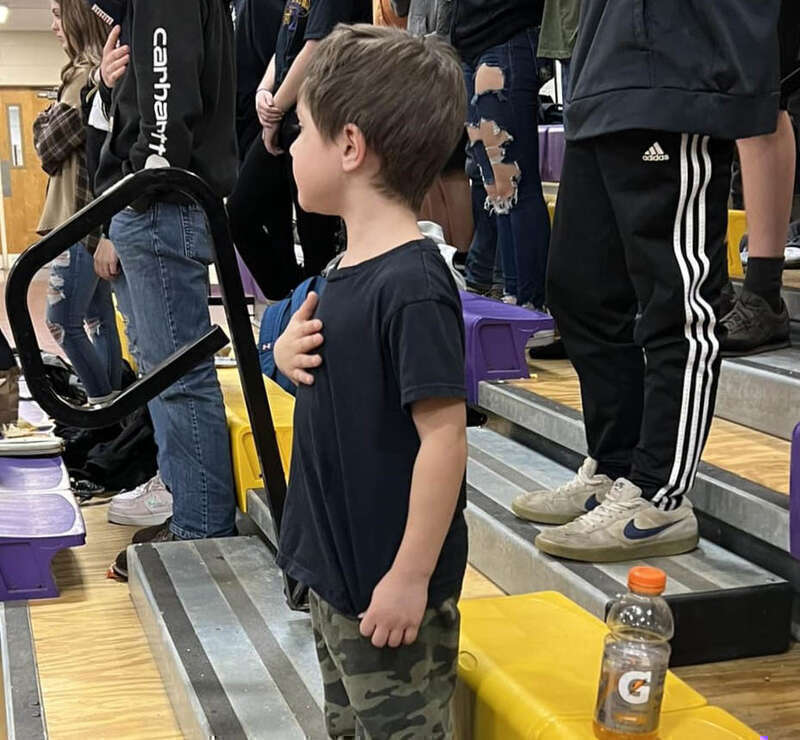 Honoring the nation’s flag is 5-year-old Mihku Sabattus, who did not hesitate to rise and place his hand on his heart when “The Star Spangled Banner” played at a recent basketball game in Woodland.  His great display of patriotism and respect came without any prompting.  Young Mihku was in attendance to cheer on his cousin Reece.  (Submitted photo) 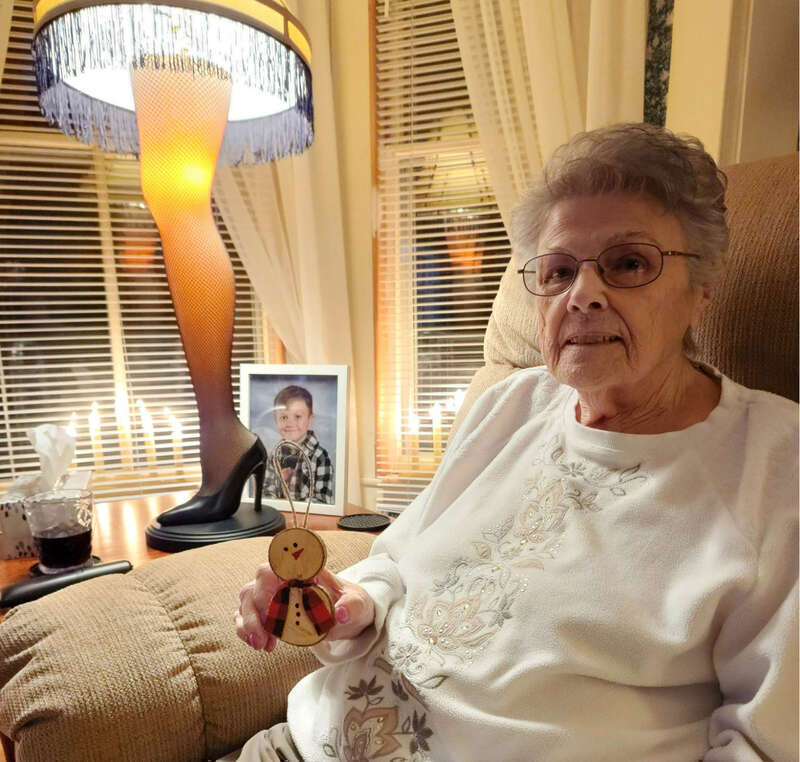 Valued reader of The Calais Advertiser Sandra Kowalski holds a handmade ornament she received from her paperboy Bradley Walton last week.  Bradley has been delivering the paper for nearly four years, and now his brother Parker also has a route.  The boys each created the ornaments themselves and made sure each of their customers received one.  (Photo courtesy of Teresa Kowalski) 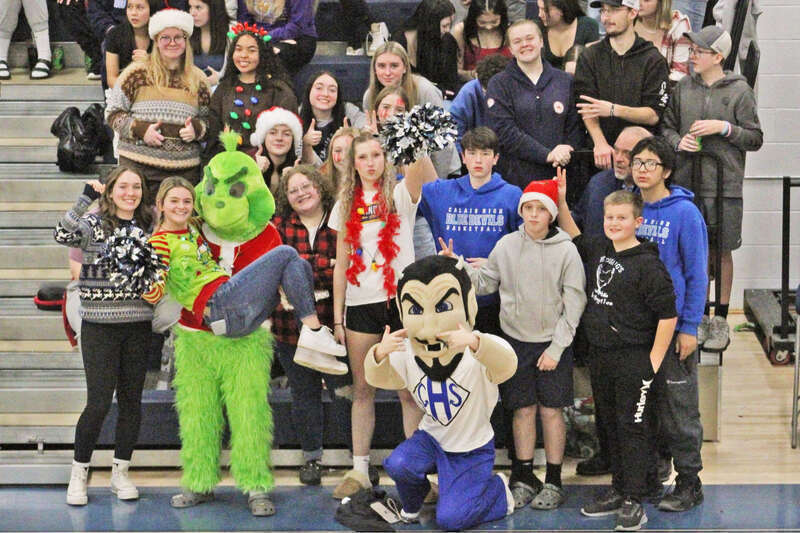 The fans sitting in the Zoo Crew section were loud and proud at the Calais-Woodland game last week.  (Photo by Jayna Smith)