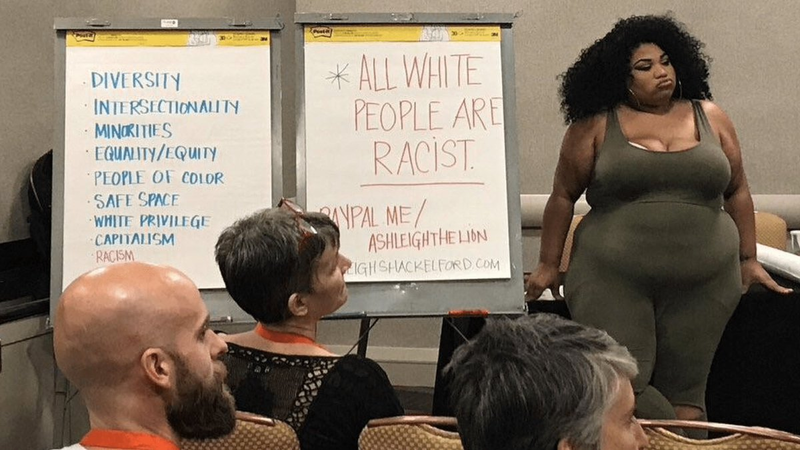 The Systemic Racism Racket Gets Trumped

The Systemic Racism Industry has had its sweet multimillion consulting racket exposed and trumped. The President has used his “pen and phone” to order the critical race theory hustle out of the federal bureaucracy. The shrieks and howls from the incredibly undiverse set of pricey diversity “consultants” kicked off the taxpayer dime can be heard in HR departments and Democratic covens across the country.

The picture below, captioned “Critical Race Theory in One Image” went viral and possibly triggered the President’s action, which was long overdue. It should have happened after the Smithsonian Institution Critical Race Theory Propaganda was revealed earlier this summer, or when these trainings were mandated in the military, the FBI and the Department of Justice.

I am pretty sure that viewing and publishing the picture and agreeing with the President’s action will be characterized as a racist act of white supremacy. Social media can and will deplatform and ban anyone, including the President, who dares to publicly question the diversity swindle.

However, it is not going to work. The left’s hypocritical and frequent charge of racism and sexism has lost its power amidst their obvious racist attitudes towards whites and Asians. Systemic hatred of capitalism (as in capitalism is irredeemably racist) is hard to swallow when the diversity divas profit handsomely, some might say obscenely, by teaching critical race theory swill to federal and state employees on the taxpayer dime, not to mention “woke” corporations on the shareholders.

In a delicious case of equal justice, it appears that scores of lawsuits will soon be filed in the federal courts at the behest of aggrieved employees who have been forced to attend mandatory implicit bias/white supremacy/systemic racism/anti-racism indoctrinations/trainings. These required sessions force employees, especially white males, to admit and apologize for their white supremacy and racist behavior and attitudes. The anti-racism credo that silence is violence is taught, and submission and “allyship” is demanded (take a knee and raise your fist).

Peter Kirsanow, an African -American member of the US Civil Rights Commission (yes there are Black conservative Republicans despite the left’s best efforts to delegitimize and erase them) has correctly pointed out that these mandatory trainings are clearly creating a hostile work environment for white males, and precedent and federal law on the matter is quite clear - employers are liable for such actions, there is no intersectionality carveout protecting supposedly “powerless”  diversity divas and grievance mongers. In other words, discrimination and racism against whites is just as illegal as discrimination and racism against Blacks or any other group. That will be true until the Democrats capture the White House and the Senate, end the filibuster and can amend the law to allow the diversity scam to continue. That is how President Biden Harris would “Build Back Better.”