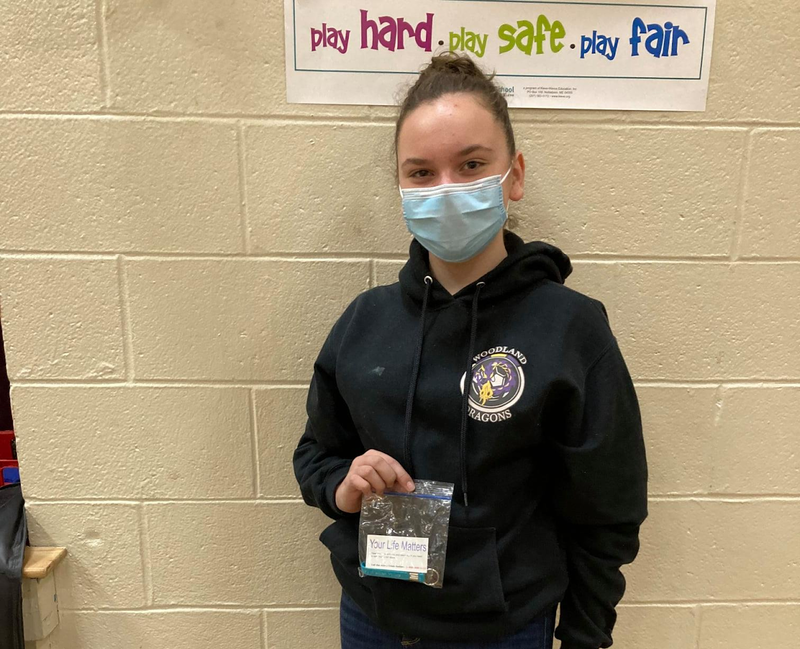 Woodland High School’s Victoria Siering showing one of the “Your Life Matters” kits that she provided to all students, staff, and faculty at the school. (Woodland Jr./Sr. High School photo)

After being impacted by the loss of a friend and classmate to suicide, Woodland High School freshman Victoria Siering felt the need to keep the discussion around suicide prevention at the forefront.  To do this, she created “Your Life Matters” kits for all of the students, staff, and faculty at Woodland Jr./Sr. High School.

Each of the kits included Life Savers candies, a keychain bracelet in honor of her friend William McIver, and contact information for the Maine Crisis Hotline.  In total, Siering made up 300 of the kits to put in the hands of all those at the school, as well as in those of the McIver family.

“The one thing that made me decide to do this project for the school is I had just lost a classmate/friend to suicide and I wanted to do something special in memory of him, but also to tell other people they are not alone and that their life matters to everyone,” Siering said.

“I feel it is important to bring the topic of suicide awareness to light because it is something not a lot of school acknowledge and talk about,” Siering explained.  “I feel it should be talked about because the more people know about the topic, the more they could help a friend or family member instead of not knowing what to do.  Everyone should know that it is okay to talk to someone when they are having a rough time.  Someone will always be there to listen even if you don’t think they will.  I would rather listen to someone than attend their funeral.”

Siering said the response she received from students and faculty at the school was very positive.  “The staff was happy to see that I made up the kits and were handing them out.  I think students were glad to know that they aren’t alone if they are struggling.  I also think that they were happy to see that someone was doing something in memory of William,” she said.

Siering is president of the freshman class at Woodland High School and holds the title of Miss St. Croix Valley Jr. Teen.  Community service projects aren’t new to her, who says she enjoys helping and bringing a smile to others.

“I compete in pageants where our platform is the Crown Cares which promotes awareness of bullying in schools and teaches kids skills for social responsibility.  In September I will be having a youth suicide awareness walk and funds raised during the walk will be put towards a scholarship fund in memory of William McIver,” Siering said.