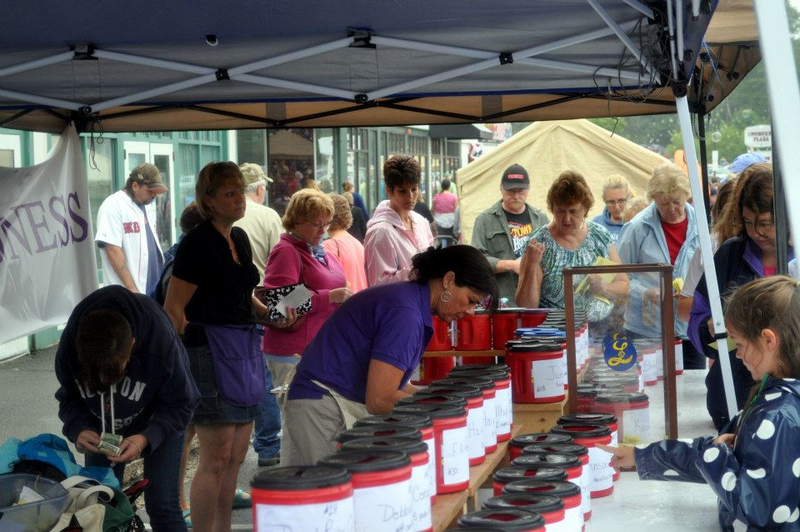 The Lioness Super Draw is always a highlight of the street fair during International Homecoming Festival and returns this year on Saturday, August 6. (2012 photo by Jayna Smith)


International Homecoming Festival is back this year, set for Wednesday, August 3 through Saturday, August 6.

Laurel Perkins, who sits on the planning committee, said despite there not being an international parade due to crossing requirements, the Town of St. Stephen and the City of Calais will each still celebrate with a plethora of events.

“We will kick off the festival with the annual ceremony on the bridge, where city and town officials from each side of the border will meet for the official handshake,” Perkins explained.

The Calais Lions Club will be on site to provide hot dogs from their weenie wagon leading up to the bridge ceremony.

“One highlight of festival this year will be the Frogtown Mountain Puppeteers that will be performing for the kids,”  Perkins said, an event sponsored by First National Bank.

Also for the kids will be a “storybook character parade.”  This will give kids the opportunity to dress up in costume, if they choose.  “Costumes are not necessary for the kids to get together and march for fun down Main Street,” she said.

St. Croix Valley Chamber of Commerce will also host the annual street fair.  This will take place on Saturday of the festival with an array of vendors set up on Main Street.  Also on Saturday, Calais Recreation Department will host its annual road race.  Typically, it crosses into Canada, but will not this year.

“Also at the skatepark, the committee there has lots of fun planned, as well,” Perkins said, with more details to come soon.

Saturday night, the committee has arranged for a family-friendly concert in the park.  This will feature the band The Filthy Casuals, sponsored by Calais Community Hospital.

Following the concert, at dusk, the festival will end with a bang with a spectacular fireworks display over the St. Croix River.

“We plan to have the full schedule out soon.  There’s still lots to be announced, with some familiar events back on the list,” Perkins said.  “People can also follow what’s happening on the International Homecoming Festival Facebook page.”

The events of this community tradition cannot happen without the support of the local businesses who, Perkins said, help out year after year.  “Donations are coming in, and we are so thankful to have such wonderful businesses who support the efforts and make this happen for the community.”

Even Amid Pandemic, Community Comes Through for Turkey-a-Thon