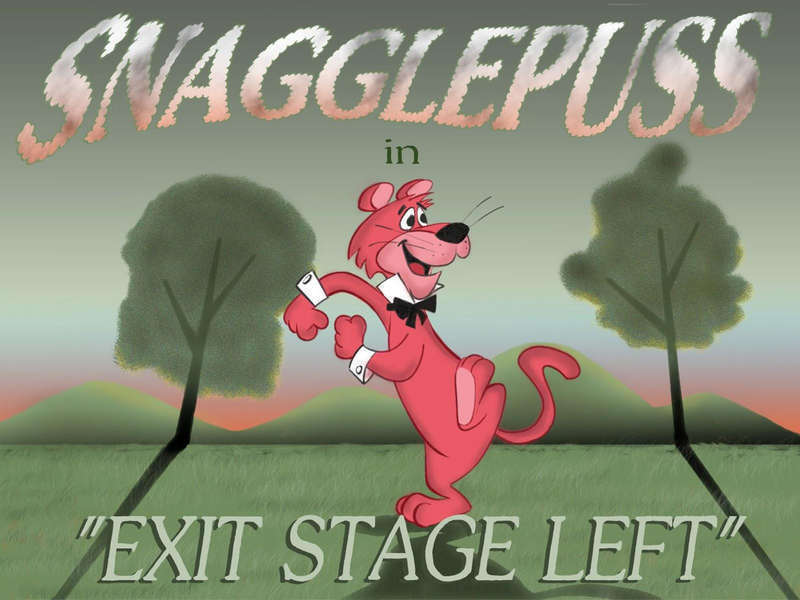 The 1960’s Hanna-Barbara cartoon character Snagglepuss had several trademark lines. “Heavens to Murgatroyd”, which traces to medieval England, Gilbert and Sullivan, and MGM actor Bert Lahr (the Cowardly Lion in the Wizard of Oz), was used to express the proto Pink Panther’s disbelief or utter bewilderment. When a hasty departure from an uncomfortable or compromising situation was called for, Snagglepuss would vamoose with “Exit, stage left.” A DC comics (excuse me, graphic novel) modern reincarnation of that meme has rebooted Snagglepuss as a 1950’s gay playwright targeted by McCarthyism and evil conservatives. Watching recent nomination and legislative hearings and news reports brought Snagglepussian memes and Murgatroydian astonished confusion to mind.

Judge Garland’s nomination hearings have focused on his previous work as lead prosecutor in the 1995 Oklahoma City bombing of a federal building and his vow to make the prosecution of domestic terrorists and white supremacists his top priority. Soon to be AG Garland showed what a fine lawyer he is in this exchange with Senator Josh Hawley (Republican Insurrectionist/Domestic Terrorist enabler- MO), where he explained why the attacks by Black Lives Matter and Antifa on federal buildings were not domestic terrorism because they occurred at night when the building was closed:

Garland: “Well, Senator, my own definition, which is about the same as the statutory definition, is the use of violence or threats of violence in attempt to disrupt the democratic processes. So an attack on a courthouse, while in operation, trying to prevent judges from actually deciding cases, that plainly is domestic extremism, domestic terrorism. An attack simply on a government property at night, or any other kind of circumstances, is a clear crime and a serious one, and should be punished. I don’t know enough about the facts of the example you’re talking about. But that’s where I draw the line. One is — both are criminal, but one is a core attack on our democratic institutions.”

The actual statutory definition of domestic terrorism does not mention business hours, but I guess this is really another case, to quote President Clinton, of what the definition of “is” is.

(5) the term “domestic terrorism” means activities that — (A) involve acts dangerous to human life that are a violation of the criminal laws of the United States or of any State; (B) appear to be intended — (i) to intimidate or coerce a civilian population; (ii) to influence the policy of a government by intimidation or coercion; or (iii) to affect the conduct of a government by mass destruction, assassination, or kidnapping; and (C) occur primarily within the territorial jurisdiction of the United States.

The 1/6 Act of Domestic Terrorism and White Supremacy

It will not happen under Biden and Garland, but the FBI should be defunded and Big Tech should be broken up. Instead, the Department of Justice will focus on identifying and prosecuting “extremists” (anyone who does not agree with the Democrats). Oh well, I understand it’s Biden administration policy that reeducation camp internees will get their Chinese Communist Party virus vaccine shots and free health care, just like undocumented aliens.

The Execution of Ashli Babbitt by a Capitol Police Officer

The officer’s identity has been withheld, but video and yet to be censored or contradicted commentary and analysis alleges that the officer is Black and shot and killed an unarmed white woman with a Trump flag/cape as she tried to go through a broken window. If the races were reversed, would the officer’s identity be protected? Would Black Lives Matters be “peacefully” protesting? Nothing to see here, just move on.

The Border is Open and so are the Cage facilities

President Biden has reopened several of the notorious “(children in cages/ concentration camp)” facilities that Democrats and the media howled about under Trump to deal with the flood of unaccompanied minors and drug smugglers now crossing the border. The Biden administration is considering putting Covid travel restrictions in and out of Florida on US citizens to punish Republican Governor Ron DeSantis for not being like New York’s Emmy winning Andrew Cuomo, but no such requirements will be applied to undocumented aliens the government is relocating in Florida. Hey, amnesty and the CCP virus mortality might turn Florida blue! Heavens to Murgatroyd!

As I contemplate progressive vitriol, I will exit stage right.