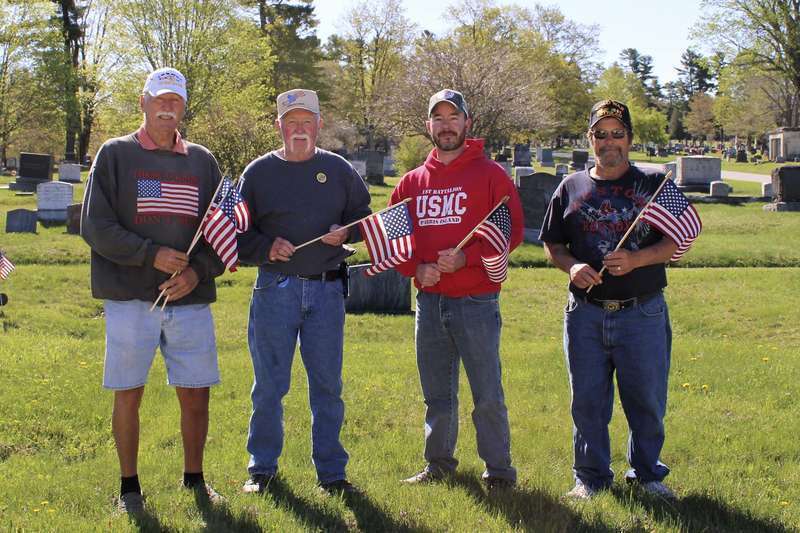 Veterans Claude Chabre, Michael McLean, Jim Meyers, and Troy Ramsdell were among the many who took part in Saturday’s flag placement at Calais Cemetery. (Photo by Jayna Smith)

Last Saturday at Calais Cemetery, the Veterans buried there were remembered, thanks to the many local volunteers who dedicated themselves to placing flags on each grave.

This annual flag placement event is spearheaded by U.S. Army Veteran Michael McLean, known to many as "Commander Mike," Commander of the American Legion Sherman Brothers Post 3.  Joining him and other Veterans and their families were officers from U.S. Customs and Border Protection, boys scouts, girl scouts, and many other community members.

“Today we had a good turnout, considering the pandemic,” said Commander McLean.  “This event gives the kids a little patriotism and lets them know what’s going on for Memorial day and what it means.”

Many thanks were given by Commander McLean to Calais IGA and Dunkin for supplying coffee and other drinks as well as refreshments for all the volunteers.  Additionally, Commander McLean reported that Todd and Lisa Smith had recently donated the United States, POW/MIA, and Maine Flags for the downtown triangle park, something the couple has done for the last few years.

Hair I Am is Back
Quick search
Archive