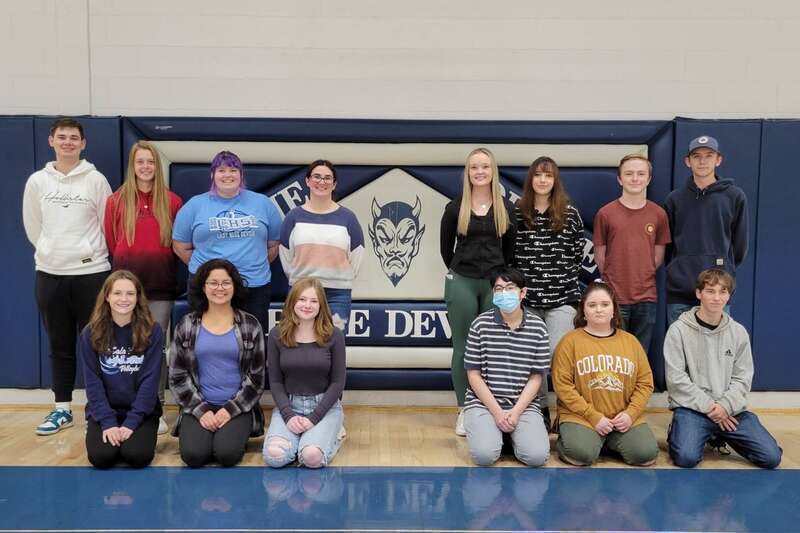 The tradition of celebrating veterans continues at Calais Middle/High School with its annual Veterans Ceremony, set for Thursday, November 10.

The ceremony is organized and executed by Mrs. Lori Ellis’s AP English class.  Because of the global pandemic, however, this will be the first year it has been held since 2019.

Each student in the class has been assigned to specific tasks in preparation of the event.

Keegan Trainor, whose job has been working on a video, believes the ceremony will be a great recognition event for the area veterans and has found the process of organizing it with classmates “pretty interesting.”

Along with Trainor, Joey McGlaughlin and Illya Selimov are also working on the video montage.  For McGlaughlin, the assembly is important for the class, to which Selimov agrees.  “It shows that we still think that veterans are important and the assembly shows we still remember them and care about them,” said Selimov.

Skylar Smith and Brenna Critchely have been busy working on the invitations to the event.  These will be mailed–or hand delivered when possible–to the members of the local Veterans of Foreign Wars and American Legion.  Veterans who are not members of those two posts are still more than welcome to attend.

Just some of the segments of the program will be the folding of the flag with explanations of each fold by students Bailey O’Rourke, Cadence Braughton, Jordan Yarnes, Tia Murphy, and Danielle White; the reading of “In Flanders Field” by Josh Cline; the reading of America’s White Table by Noah Hart; setting of the White Table by Taylor Shain; and recorded interviews of veterans by Jordan Yarnes and Sidney Critchley.

“I’m looking forward to seeing everything that everyone does,” said Kylie Brown, with regard to the ceremony and the work of her classmates.

Sophia Clark explained she is looking forward to seeing the final assembly being presented, also.  “No matter how long ago [the veterans] served, their sacrifice lasts a lifetime and we should always be appreciative of that.”

All veterans are invited to the Veterans Ceremony, hosted by Calais High School’s AP English class.  It is set to begin at 8 a.m. on Thursday, November 10.

Bald Eagles Dying from Lead Bullets – Without Having Been Shot