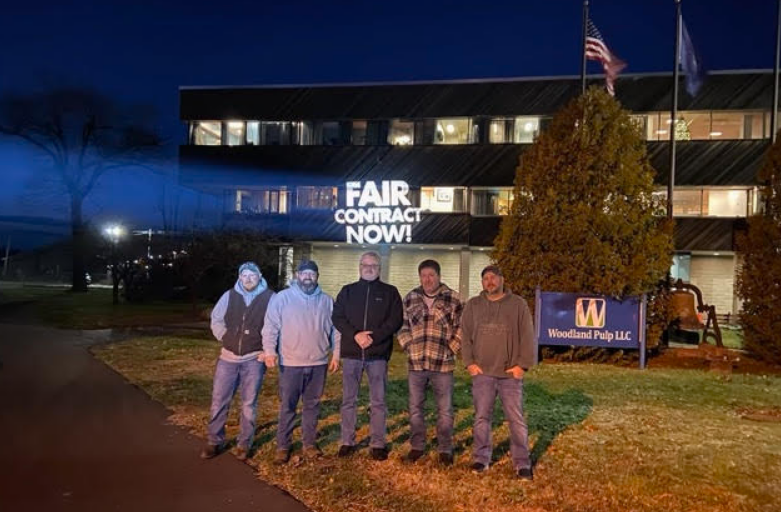 Some members of USW Local 27 stand in front of the Woodland Pulp offices where the USW “Bat signal” was displayed Thursday evening. (USW Local 27 photo)

USW Local 27 members at Woodland Pulp are on the verge of a “strike vote,” according to a press release from a spokesperson at Maine AFL-CIO on Thursday, November 17.

The workers are “demanding that the company present a contract offer that provides high enough wage increases to keep up with the cost of living.”

Union members are scheduled to take a vote on whether to strike or accept the company’s final offer after their bargaining session with the company on Monday, November 28.

The press release went on further to explain that the members of the union will be projecting the union’s “Bat Light” on the side of the tissue machines at the mill on November 17 with the message “Essential Workers Deserve a Fair Contract.”

“Whenever there was trouble in Gotham City, they would project the Bat Light on a  building to summon Batman.  The USW Bat Light signals that workers are ready to strike if their employer refuses to bargain a fair contract and that the 1.2 million members of the United Steelworkers have their backs,” said USW staff representative Mike Higgins.

“USW 27 members worked very hard through the pandemic to produce essential products for the American people.  Unfortunately, the company has refused to present an offer that respects their hard work and dedication.  With record-high inflation, essential workers deserve wages that keep up with the rising cost of living.  We strongly urge the company to present a fair contract to avoid a potential strike.”

According to Scott Beal, of Woodland Pulp, mill management and the union are in negotiations and follow a process.  “These discussions have not concluded,” he said, adding, “We're looking forward to meeting with Union officials the week after next. Woodland Pulp remains optimistic that we can work with the committee to collectively bring these negotiations to an equitable and logical conclusion.”

According to its website, Woodland Pulp is the largest employer in Washington County, with approximately 310 employees.

Walmart Employee Caught in a Random Act of Kindness

Fiddlehead Season is Upon Us