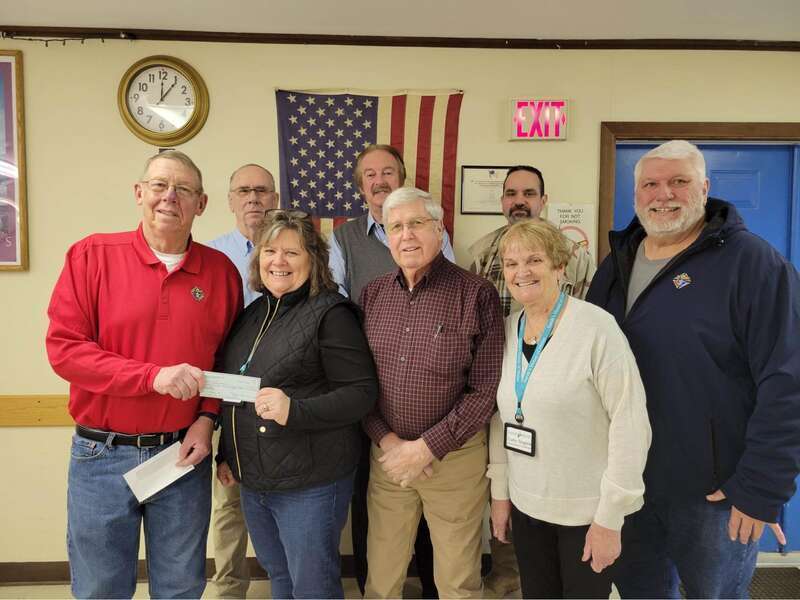 Knights of Columbus Raise Over $5,500 for Sarah’s House of Maine

This past fall, Knights of Columbus #149 organized and executed a raffle of 100 gallons of home heating fuel, with all money raised to be donated to Sarah’s House of Maine.

According to Knight Vinton Cassidy, the group was motivated to host the raffle after a suggestion by church member Cheryl Amber and the high number of people in the community who have been affected by cancer.

Not only were the Knights able to secure the gracious donation of the oil from VL Tammaro, the tickets used in the raffle were also unexpectedly donated by Calais Press, while advertising in this publication was provided at no charge by Publisher Pierre Little.  Thus, 100 percent of all money raised was able to be donated directly to Sarah’s House of Maine.

Sarah’s House is a cancer hospitality house located in Holden.  It serves many from all over the state who are receiving treatment, with Washington County residents making up the majority.

Executive Director Delores Landry, of Sarah’s House, explained that the house has hosted guests receiving cancer care from 15 of Maine’s 16 counties.  Washington County makes up a majority of guests at 43 percent.

According to Knight Vinton Cassidy, the winner of the raffle was drawn last month, but that person–who wished to remain anonymous–wanted the prize to go directly to Sarah’s House.  With it outside of VL Tammaro’s service area, Cassidy said owner Mike Tammaro did not hesitate to help out.

“I called up Mike Tammaro and he gave us another check for Sarah’s House [in lieu of the oil],” he said.

The Knights expressed gratitude to the many who purchased tickets in support of Sarah’s House and to all the businesses and individuals who helped sell tickets.  Johnson’s True Value and Calais Ace Homecenter offered to be selling locations, while members of the Daughters of Isabella, plus 13 other people outside of the Knights of Columbus group, all helped sell tickets.

Cassidy said this fundraiser for Sarah’s House of Maine will likely become an annual event.

“We couldn’t do what we do without this type of support,” Landry said.  “We’re privately funded.  We get some grants from the Maine Cancer Foundation, but other than that, it’s these types of fundraisers that make it happen, so it means a lot to us.  It’s pretty heartfelt.”

Knights of Columbus is a global Catholic fraternal service order dedicated to the principles of charity, unity, fraternity, and patriotism.

One can learn more about Sarah’s House of Maine–including how to donate goods or monetarily–by visiting sarahshouseofmaine.org.

New Restaurant and Tavern will Energize Downtown in Spring, 2020