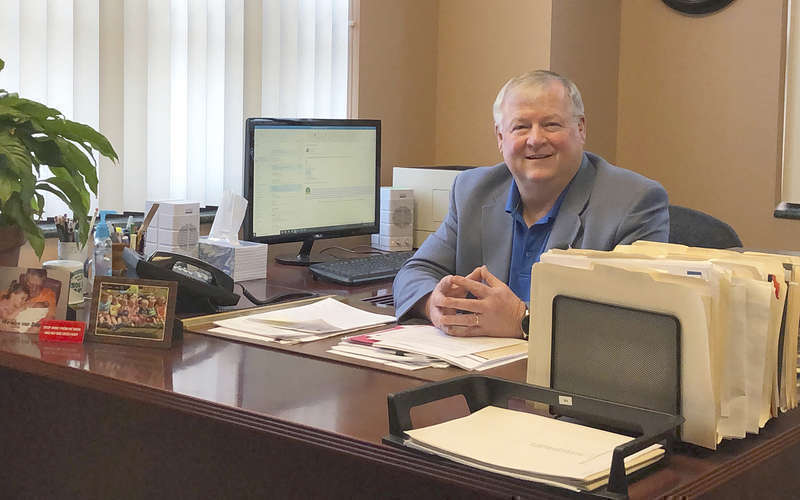 Rod Boula, CEO of CRH sat down with the newspaper to discuss ongoing progress. (Photo by Pierre Little)

After a recent update to the city council, Calais Regional Hospital’s CEO Rod Boula sat down with The Calais Advertiser, providing more specifics on the current state of the hospital.

Boula accepted the position of CEO at Calais Regional Hospital just under four years ago.  He has 36 years of experience in healthcare--33 as a CEO--and is confident things are turning around at the hospital.

“I’ve done four hospital turnarounds.  This is my fifth and my last,” Boula stated.

“There’s a lot of work being done behind the scenes with USDA,” Boula said, explaining that the USDA was responsible for helping fund the construction of the hospital twelve years ago.  With the current long-term debt of $15 million associated with the building, there is now a waiting period for an appraisal to take place, a necessary task associated with the hospital’s bankruptcy.

“It’s a little bit different of an assessment than what people are accustomed to,” Boula said of the appraisal.  “This assessment is not so much of the type of assessment you would get if you have to rebuild if you had a fire or had a catastrophic event.  This assessment is one that if we were to fold up services and we no longer exist, no more hospital, who would buy the building and for what price?  It’s market-based...It’s used to help reestablish value.”

Thus, the assessment is not to show replacement value; however, it does help the organization move forward with a new value to refinance.  “So $15 million could be $10 million, or $15 million could be $5 million, we don’t know, but anything in that direction would be helpful to us,” Boula stated, adding that as things currently stand, the long-term obligations to the hospital with regards to debt cannot be met.

As for the length of time the hospital is expected to be in bankruptcy, Boula said, “It depends on where the long-term debt is, how long that’s going to play out in negotiations with the USDA...if everything comes to fruition with respect to refinancing we might be able to get out of this sooner than later, but if there’s going to be push back on the government side on this refinancing, it could be pushed out to October, November, December of this year.”

The best-case scenario, he said, is to have a fair appraisal come in, which will then help the hospital wrap up the $15 million debt to USDA.  The debt servicing right now is on hold because of the bankruptcy, which benefits the cash flow side of things at the hospital.

Boula is optimistic with regards to the hospital’s current state.  “We’ve got our challenges everywhere, but there’s not an organization that doesn’t have its challenges.  We’re moving forward and things are going well in that direction, as far as the provision of care that we are providing, which is good.”

He noted that the recent Emergency Room services switch from BlueWater Health, which the hospital has used since 2011, to Envision Physician Services was a much-needed change for the hospital.

“On the ER side, [the switch to Envision] is almost pretty close to $600,000 per year savings that we will have.”  This switch, with the huge cost savings, will mean no less quality care for patients.

Physicians within Calais Regional Hospital who were with BlueWater were given the opportunity to go to Envision.  Boula was pleased that local resident Dr. Cressey Brazier was one to make the switch.  “[Dr. Brazier] is going to be retained, which is great, because he’s highly respected, a very good doctor,” he said.

Recruiting has been ongoing at Calais Regional Hospital.  Boula said the hospital is currently recruiting for primary care providers, pediatricians, and orthopedics, noting that the hospital had an orthopedics department in the past, and wants one back.

“We have too much out-migration,” Boula explained, with some people choosing to travel outside of Calais for medical services.  “I’ve said it when I came here, ‘Use it or lose it.’ I can’t keep the costs down if people aren’t using [local medical services] and are going elsewhere.”

Births [Obstetrics] he said were funded out of the hospital’s funds and the amounts allowable from Medicare and Medicaid do not cover the full costs.  It costs the hospital approximately $32,000 per birth and with 53 births, it represents a significant reduction in available resources that comes straight out of hospital general funds.  The reimbursements from Government programs for OB maternity services only cover 18% of the costs.  “This is where our losses have been going”, Boula said.  Meaning these funds create cashflow shortfalls that would be otherwise used to cover debt servicing and building mortgage payments.

Boula also provided an update on the nurses’ union strike.  “We’ve been without a contract with the nurses and lab techs since October of 2018.  We negotiated from slightly before that time to May of ‘19 and that’s when we came up with our last best and final offer, then in September [the union] did a vote to strike.  We never received a formal notice of that...The way it’s been explained to me by legal counsel, [the union members] can strike at any time.  They have to give a 10-day notice.  There hasn’t been any movement on that.”

In the instance of a strike, Boula said the hospital does have a plan in place, however, he could not provide details.  “When we were in the court hearing, the judge honored our right to not disclose our strike plan.”

Boula also noted his recent experience providing an update at a city council meeting.  “It was really good,” he said, noting the council’s support.  “I was pleased to go to the city council and that they are in support of what we’re doing.”  He added that he is willing to provide more regular updates to the city council.

Boula praised the hospital board, the administration, and the employees who “make our hospital a great hospital to be at.”  With nearly 260 positions filled at the hospital, it is the city’s largest employer.

Transportation Service One of Many Offered by Downeast Community Partners