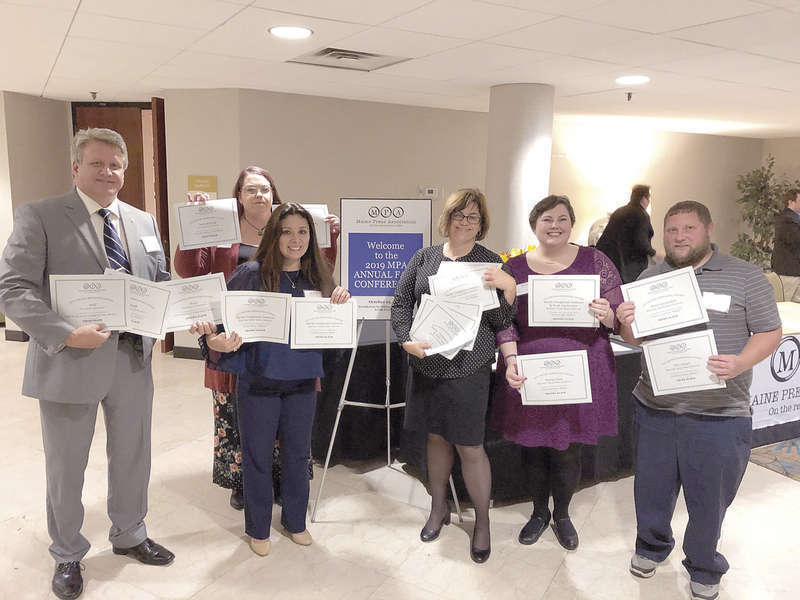 The awards were presented Saturday night at the DoubleTree by Hilton Hotel in Portland, concluding a day of workshops and networking for reporters and photographers, journalists, advertising staff, and designers throughout the state.

Publisher Pierre Little said he and his wife Wendy are very proud of both newspapers this year. “We have worked really hard, and we thank the Maine Press Association for these awards. We are dedicated to serving our readers each week with the most relevant and pressing coverage,” said Little. “Thirteen awards went beyond our expectations, but it indicates we are fulfilling our newsroom mission to serve our hometown communities well.”

“I am very proud to have received these awards. I have always believed that the editorial and op-ed pages are the heart of any weekly,” said Leubecker. “And this weekly has steadily improved over the last few years. These pages have been a big part of this, and thank you to the MPA for recognizing that.”

“I want to thank our editor Sarah Craighead Dedmon and our editorial teams at both newspapers,” said Little.

During the conference, the MPA inducted three Maine journalists into the Hall of Fame: Stephen Fay, who recently retired after 23 years as the managing editor of The Ellsworth American; Marian McCue, longtime publisher and former editor of The Forecaster; and the late Christopher Cousins, a Statehouse reporter for the Bangor Daily News.