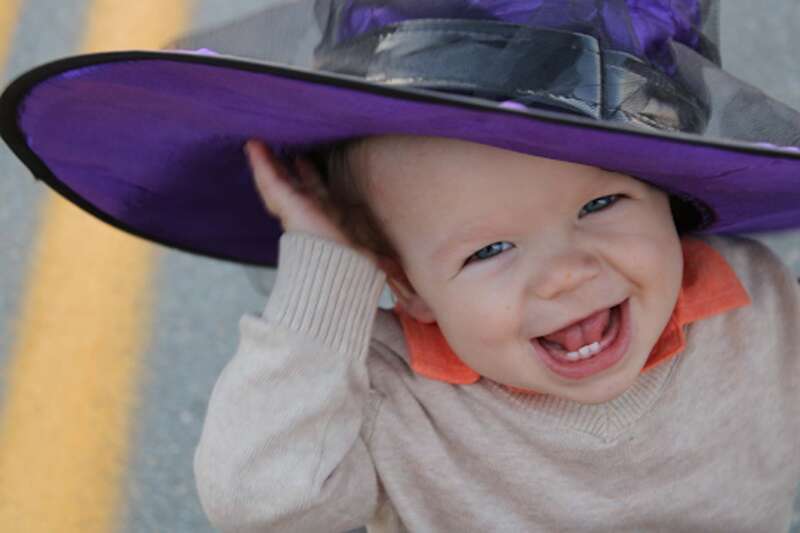 The youngest guest at the Harvest Dinner was one-year old Asher. Not only did Asher enjoy the delicious food, he also had fun trying on a Lioness witch’s hat. This photo, originally published in the October 1, 2020 edition, won overall Best in Show in the 2021 Maine Press Association Awards. (Photo by Jayna Smith)

At its annual state conference, held virtually on November 13, the Maine Press Association recognized The Calais Advertiser for its exceptional journalism work, presenting it with 14 awards.  Its sister paper, Machias Valley News Observer, won 6 awards, for a total of 20 awards combined between the two Washington County publications.

Pierre Little, Publisher of the Advertiser, said, “It is so incredible to be recognized by the Maine Press Association once again this year.  I thought we won a lot last year, but this year really is incredible.  I could not be more proud of our efforts and our editorial team.  We have won so many awards this year, we are running out of wall space to hang them all.”

Jayna Smith proved her merit in the photography category again this year, after being the first place selection in the Feature Photo and the second place selection in the Scenic Photo categories last year.  This year, she earned the highest placements in two photography divisions, one in Sports Photography and one in Picture Story.  Even more, she won the overall Best in Show for her photo of a youngster having fun.

“To earn two first place awards in the photography category is exciting for me, but then to get an overall Best in Show is incredible,” Smith said.  “I am so excited that the sports photo chosen actually shows my son doing what he does best – protecting home plate at a baseball game.  The second award for the picture story is certainly an honor, as it features our local veterans.  To be recognized for recognizing them tells me I’ve done my job well.  Then the Best in Show... what an honor.”

Smith also was recognized in the advertising category with first place for Best New Revenue Idea, which featured shop local tips.  A second-place win was earned by Smith for her Sports News Story, “Behind the Scenes of Blue Devils Basketball,” which featured the two students responsible for broadcasting games.

She and graphics designer Cheryl Stabinski together took the top award for Self-Promotion for their We Believe ad, a Calais Advertiser-sponsored ad that featured many familiar faces from area businesses who each gave an optimistic view of the area as the new year approached.

Smith and Stabinski also earned second place for the Local Ad division of the advertising category.  This ad featured a well-designed layout of local businesses as the holidays approached.

Stabinski herself earned two first place awards.  One was an ad she created for Teacher Appreciation, the other was for her specialty page design.  This page featured the Class of 2020 from Calais High School. Stabinski also took a third place win in the Sports Page Design category.