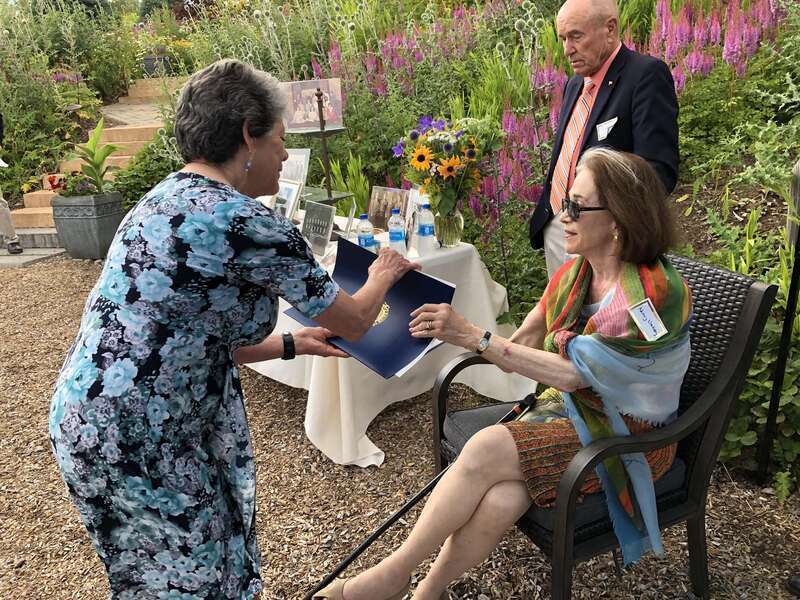 Senator Marianne Moore presents Nancy Unobskey, Sidney’s spouse, a Legislative Sentiment in Memoriam of Sidney’s passing on behalf of the State of Maine’s 130th Legislature. The Unobskey’s supported Calais this past year with a building donation for the Veterans’ Center and through the years supported educational programs with Husson University helping Washington County students. Sidney and Nancy founded the Unobskey College in Calais before it was rolled into Husson University programs. The Unobskey’s philanthropy through the last century has transformed education, rural Maine economic development and the arts. Sidney was born on April 18, 1937 and passed away January 20, 2021. He will be missed.

Sidney Unobskey - Proud Member of His Hometown of Calais

Celebration of Life held in Robbinston this past Sunday

Sidney Unobskey was a generous, deeply caring, passionate man. My father embodied a flair and a genius that was very much an inheritance from his family. It was his legacy to all who knew him. Sidney Unobskey possessed out-of-the-box creativity on a massive scale. He saw challenges and envisioned solutions that stripped away conventions to reveal new levels of promise and potential.

At first glance, my Dad's ideas often seemed to ignore the laws of physics. We look upon many of his successes, and we forget how outrageous they appeared when they started as visions and plans— move the ballpark back into the City of San Francisco? Build a native garden overlooking the ocean in Robbinston, Maine? Yet, once having seen a spark of promise in a new way to design a shopping mall, or a garden, or a city, my Dad had the spirit to grind out the analysis, the guts to put himself behind a great idea, and the charisma to lead change.

Perhaps most important, he had a belief in the potential value of human insight and intelligence.  Sidney Unobskey was a lifelong student of the alchemy of human potential. He was a tireless guide to me, to Arthur, to his wife Nancy, and his grandchildren, along with a diverse army of friends around the world. He could see the potential for an individual, and he savored the opportunities to prod each of us forward.

My father put in tireless hours, with days that started before dawn until after dark, seven days a week, to achieve many of his most ambitious ideas. He labored on his projects the same way he had seen his father work and how Unobskeys had worked since they first arrived in America.  My Dad taught me that this intrepid spirit was a product of our history. The Unobskeys were a family of big daring visions, a family that valued its friends and one proud to support them.  My father had watched his father champion the first tidal wave energy projects almost a century before they became a reality.

My father’s optimism and intense focus came from the success of a much bolder vision that his grandparents and their sons had pursued and achieved— to immigrate and settle in Calais.  Sidney Unobskey’s entrepreneurial visions leaned on one extraordinary success, a grand existential bid by the family, one that succeeded against all odds, and one that opened up vistas for the big dreams that followed. In 1912, the Unobskeys settled here in Calais, making it their home with the best of their wits and every ounce of their strength. For the last century, Calais has been the touchstone for the family's ambitious spirit, as it was for my father until his last days. It is fitting that we celebrate my father's life here, at the home that he worked to design and build, and with the community that he so treasured.

My Dad was a man with a big heart and a stalwart belief in the power of communities. Thanks to all of you for joining us today to celebrate that legacy.

Love Everlasting: 56 Years of Happiness Together

Santa and the Grinch Get a Tour of Calais, Thanks to Fire Association
Quick search
Archive