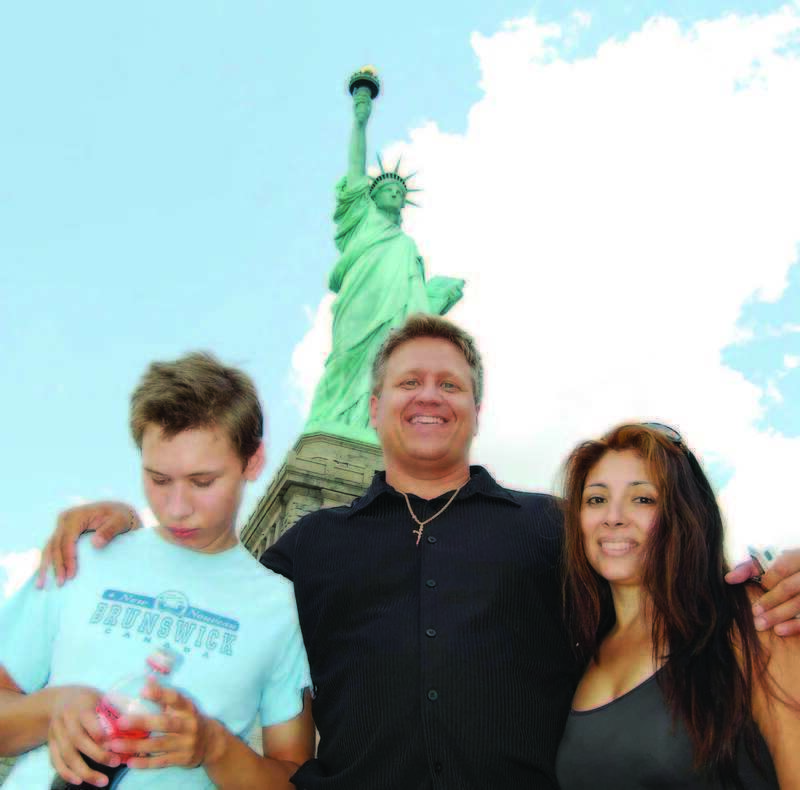 Advertiser’s Publisher, Pierre Little and his wife Wendy with their son Luke who has autism, on a visit to New York and the Statue of Liberty. (Photo by: the Little family)

Last year, the Centers for Disease Control and Prevention determined that approximately 1 in 59 children is diagnosed with an autism spectrum disorder, with boys four times more likely to be diagnosed with autism than girls.

April 2nd marks World Autism Awareness Day, first adopted in 2007 by the United Nations to shine a bright light on autism as a growing global health priority.  As the Autism Speaks website (www.autismspeaks.org) explains, each year on World Autism Day since 2010, Autism Speaks celebrates its international "Light It Up Blue" campaign.

On this day, people all over the world are encouraged to wear blue shirts, hats, scarves and other attire to recognize the World Autism Awareness Day.  As well, Light It Up Blue is a time when businesses, residences, and more, unite by sharing bright blue lights in honor of the millions of individuals and families affected by autism.

Caleb White is a ninth grade student at Calais High School who was diagnosed with autism a few years ago.  He wishes kids had a better understanding of autism. Caleb shared with The Calais Advertiser how living with autism presents some daily challenges that other people may not realize or understand.

“Not wanting to talk because of my stuttering is the hardest part,” Caleb reported.  He also pointed out that class time can be difficult. “It’s hard to concentrate and remember things in class because I focus on what is around me.”

Adjusting to changes that, to some, may seem simple or even go unnoticed is also something difficult for Caleb. Regarding change, Caleb said, “I hate it.”

His mother Heather provided a recent example of this when she changed her dining room table and chairs around.  This caused great anxiety for Caleb, even affecting his sleep. “Most kids don’t worry about that stuff. I do,” he said.  “It’s really hard when things aren’t the same.”

Heather and her husband Randy are grateful for those in the community who do have an understanding of autism, but they wish there were more resources available.  “There really aren’t a lot of options or opportunities for kids who are on the spectrum to get together,” she said.

“While some kids on the spectrum are comfortable joining sports teams or clubs, many are not.  It is very hard for Caleb to even sit in an assembly or game due to the loudness around him.”

Heather added, “Caleb is very kind, thoughtful, respectful, and has a great desire to be more social.  It’s just very difficult to overcome the fears.”

To celebrate and honor Caleb and others like him, and in an effort to spread awareness and understanding of autism, consider wearing blue on Tuesday, April 2nd.  People can also “light it up blue” by switching their regular outside light for a blue one in honor of the day.