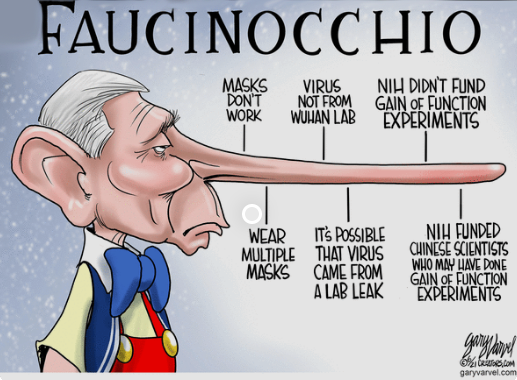 Tony Fauci is America’s senior public health bureaucrat. He is the Director of the National Institute of Allergy and Infectious Diseases (NIAID), where he oversees and greenlights millions of dollars of taxpayer funded research, and Senior Medical Advisor to President Brandon. He is also an egomaniacal serial liar and a power hungry enemy of freedom. If Nurse Ratched from One Flew Over the Cuckoo’s Nest was a transgender octogenarian, Tony Fauci is what you would have.

Fauci has routinely and repeatedly misled the American public on public health matters since the 1980’s. He once promised an AIDS vaccine, but MSNBC and CNN seem to have lost the videotape. It is difficult to know whether the misinformation is a deliberate lie or a consequence of overconfident self-deception, or both. Fauci recently proclaimed that he “represents Science”, with a capital S, and attacks on him are attacks on Science, which of course should never be questioned (except by accredited and high priests of Science.) Nurse Ratched couldn’t have said it any better.

Senators Ted Cruz and Rand Paul have done excellent work revealing Fauci’s record of disinformation (swamp speak for politically motivated lying) and have referred him to the Brandon Department of Justice for perjury and Contempt of Congress. Unfortunately, only right of center Americans and parents questioning racist Critical Race Theory and Covid Mandates have anything to fear from the Brandon DOJ.
Cruz detailed the perjury case in a recent series of tweets:

“Fauci is an unelected technocrat who has distorted science and facts in order to exercise authoritarian control over millions of Americans. He lives in a liberal world where his smug “I REPRESENT science” attitude is praised. Here are the facts:

1.) On May 11, Fauci testified before a Senate Committee that “the NIH has not ever and does not now fund gain-of-function research in the Wuhan Institute of Virology.”

2.) On October 20, NIH wrote they funded an experiment at the Wuhan lab testing if “spike proteins from naturally occurring bat coronaviruses circulating in China were capable of binding to the human ACE2 receptor in a mouse model.” That is gain of function research.

3.) Fauci’s statement and the NIH’s October 20 letter cannot both be true. The statements are directly contradictory.

4.) 18 USC 1001 makes it felony, punishable by up to 5 years in prison, to lie to Congress.
No amount of ad hominem insults parroting Democrat talking points will get Fauci out of this contradiction. Fauci either needs to address the substance—in detail, with specific factual corroboration—or DOJ should consider prosecuting him for making false statements to Congress.”
It looks to me like Fauci greenlighted taxpayer funded research at the Wuhan Lab which resulted in the creation and release, whether accidental or purposeful, of the Chinese Communist Party Covid Bioweapon. The Democratic Party weaponized Fear and the Pandemic crisis to unconstitutionally change election rules to steal the 2020 Presidential election and install President Brandon and Vice-President Giggles.

The “newly” discovered Omicron variant is another opportunity for the left to destroy more liberty and gain more control, and they are already on it, stoking fear and making plans to steal another election with universal no questions allowed mail in voting and a pandemic crisis rationale for ending the filibuster, passing trillions in progressive wish list/economy destroying inflationary spending (which won’t cost anything!), and granting amnesty to millions of illegal immigrants who will gratefully vote for the Democrats who opened the border for them.

Jon Reisman is an associate professor of economics and public policy at the University of Maine at Machias. His views are his own. Mr. Reisman welcomes comments as letters to the editor here, or to him directly via email at [email protected].