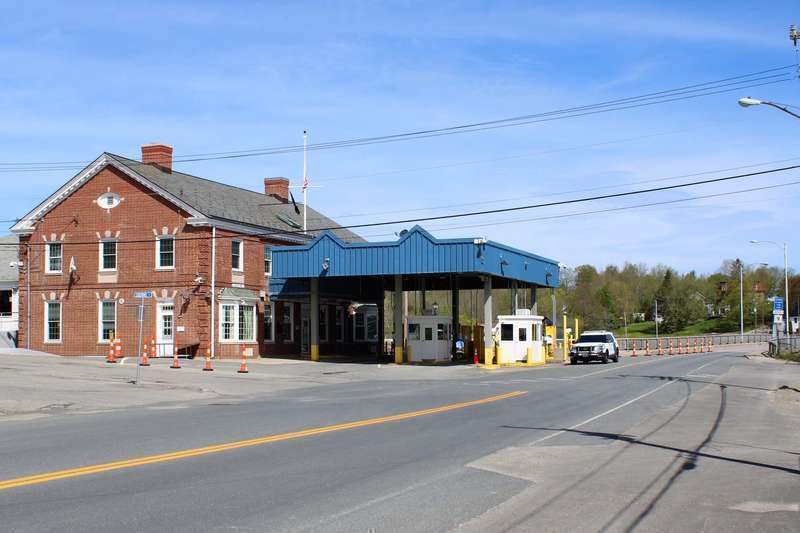 Border restrictions have brought traffic at Ferry Point Bridge to a near halt, with only essential workers allowed to cross. (Photo by Jayna Smith)

The United States and Canada recently reached an agreement to continue the closure of the border to all non-essential travel, at least until June 21st.  Border restrictions were first announced on March 18th.

The closure will continue the prohibition of non-essential traffic, allowing only for the flow of trade and commerce, such as truckers, as well as healthcare workers who live and work on opposite sides of the border.

Canada’s Prime Minister Justin Trudeau said, “This is an important decision that will keep people in both of our countries safe.”

St. Stephen Mayor Allen MacEachern noted the effects of the border restrictions on people with families on the opposite side.  “Living in St. Stephen all my life, I never would have thought there would be a time that I could not cross.  We have residents that have family and friends on both sides of the border, my family included, separated due to this border closure and this is not easy on any of us,” he said.

Local businesses in Calais have felt the effect of the lack of Canadian shoppers.  According to Dan Slefinger, Duty Free Americas’ Border North Director of Operations, 75 percent of the staff at Hardwicke’s convenience store and gas station had to be laid off and the store’s operating hours reduced.  He estimated that 80 percent or more of its customer base is Canadian.

Likewise, DFA’s Best Stop across the street had to be closed for the time being.  The two Duty Free Americas in Calais were temporarily closed, although they have recently reopened to serve the commercial traffic passing through, and can serve non-border crossers for eligible purchases.

MacEachern said St. Stephen is also experiencing the economic effects of the border restrictions.  “As a border community, we both rely on traffic generated by border crossings.  With tourist season coming up, I worry about our businesses that rely on that business to cover the expenses generated during the long winter.  It is really strange looking over to Calais and wondering what is going on over there and if all is okay.  We are looking forward to the day that the border is opened and this COVID-19 pandemic is under control.”

Many in the area have been concerned with Calais City Council’s recent decision to allow Calais businesses to open under their own terms, without concerns of the Governor’s Executive Order, leaving some to wonder if this would cause extended closure of the Calais border crossings.  According to port director Corey McPhee, decisions regarding border closures and restrictions do not come from the local or the state level.  “Customs and Border Protection is a federal agency.  We will continue to restrict traffic, or, when the time comes, remove those restrictions based on guidance from our leadership at the federal level,” he said.

Charts and Tables Across My Desk