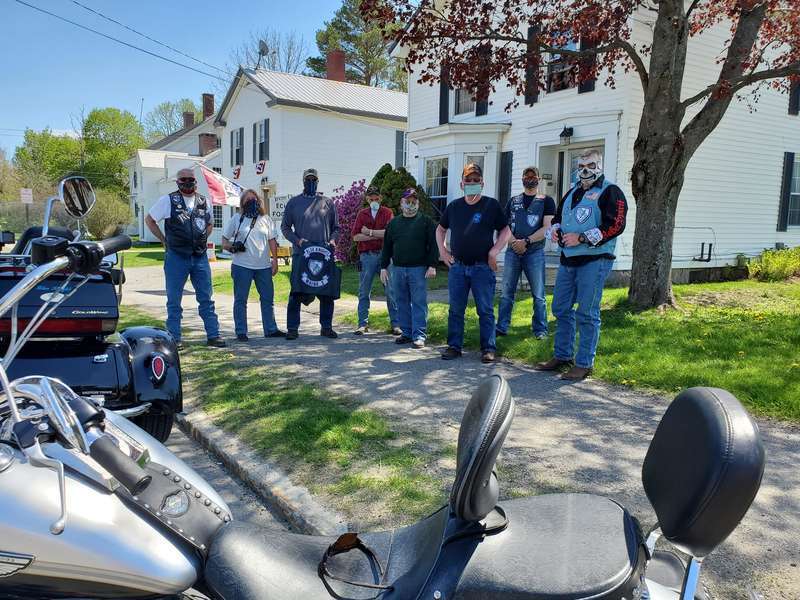 Blue Knights MC Distributes Food to Pantries Across the State

Last Friday, the Irene Chadbourne Ecumenical Food Pantry in Calais and the Woodland Community Food Pantry in Baileyville each received a visit from members of the Blue Knights motorcycle club.  Led by David and Sherri Wight, the club distributed to each pantry food packets from a University of Maine Honors College public service project.

Each year for the last four, the Honors College Student Advisory Board at UMaine hosts the one-day Maine Day Meal Packout (MDMP) event.  At this event, an assembly line takes up the gymnasium where students work measuring and weighing to pack 75,000 meals to help combat food insecurity in the state, according to Sherrie Wight.

Due to the COVID-19 pandemic, this year’s MDMP had to be canceled, but students still wanted to make sure Mainers were provided the food packets.  The supplier of the bulk food that makes up the packets was willing to package the meals for the MDMP, and the students, through the generosity of the Blue Knights, were able to get the packets distributed.

The UMaine group raised close to $25,000 to purchase the meals, which cost around $1.80 per packet and include six meals in each, Wight explained.  Each is fortified with vitamins and minerals.

Fr. David Sivret, director of Irene Chadbourne Ecumenical Food Pantry, said of the donation, “I think it’s great.  I think we’re going to use these for the backpack program for kids for the weekend.  That’s when they don’t usually have enough food.”

The Blue Knights were able to leave 360 of the food packets at the Calais food pantry, for a total of 2,160 meals.  David Wight said there are various flavors included in the donation, and each meal requires only the addition of hot water.

The Blue Knights International Law Enforcement Motorcycle Club, Inc. is a non-profit fraternal organization consisting of active and retired law enforcement officers.  The club began in 1974 in Bangor and has extended nation- and world-wide.