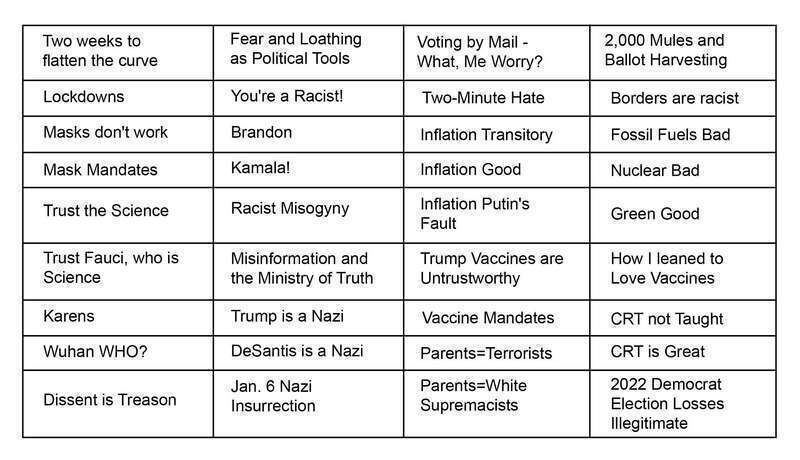 One of the questions people ask me when they find out I am retiring is what are you going to do next? I have talked about continuing to write my column and aggravate leftists (usually a two for one), but nothing particularly specific. Last week, I was discussing the 1619 Project, the fraudulent Pulitzer Prize awarded to Nicole Hannah-Jones and the New York Times for their agitprop effort to tar the United States as irrevocably racist and morally stained, the Covid lockdowns, public health authoritarianism, how the Democratic Party  and the left used the crisis to unconstitutionally alter election laws in key battleground states, steal the election, evict the bad orange man, enact regime change, install Brandon, open the Southern border, reignite inflation and drive the price of gas to $6/gallon.

I had a revelation: I should start the 2019 Project and document how the left set out to destroy America and all the deplorable racist, sexist, homophobic and transphobic evil Trump voters who dared to defy Hillary, the Deep State and the politically correct virtuous order of things. The Machias Valley News Observer and The Calais Advertiser could sponsor an alternative “long form journalism project” with an alliterative nod to the Washington Post’s “Democracy Dies in Darkness” updated to “Freedom Fails from Fauci”. A Pulitzer Prize is probably not in the cards, but we might get a Tucker, or possibly even a Musk.
The 2019 Project would start with a detailed examination of the collaboration between Fauci, the Wuhan lab, the Chinese Communist Party, and the public health autocracy. Moral relativism would be employed to condemn the medical gain of function researchers who sought to engineer supervirusses in China so as to protect the American public in case one was ever deployed or escaped (Stephen King has already written a major section).
The project can then document how the Covid-19 crisis became a pretext to destroy freedom and create a dystopic United States. Each of the following will be a chapter or three:

If you have a chapter (or three) you think I should add, please let me know.

Effective September 1 2022, Jon Reisman is retiring from the University of Maine at Machias after 38 years.  Mr. Reisman’s views are his own and he welcomes comments as letters to the editor here, or to him directly via email at [email protected].